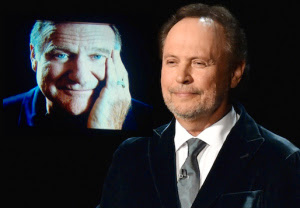 Criticized as racist — never mind that Muslim is not a race and women not a race, either:


...[The tribute] included a short snippet of a stand-up performance during which Williams borrows a pink scarf from an audience member in the front row and wraps its round his head to simulate a Hijab, or Islamic headscarf.

Viewers participating over Twitter were quick to criticise the inclusion of the joke as "racist"...