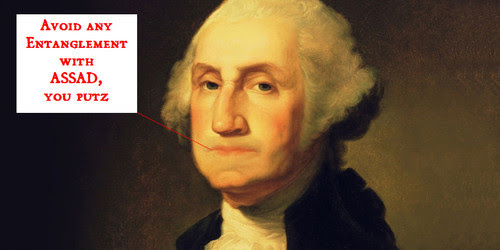 If Isis, which styles itself Islamic State, threatens to take all or part of Aleppo, establishing complete dominance over the anti-government rebels, the US may be compelled to act publicly or secretly in concert with President Bashar al-Assad, whom it has been trying to displace.

The US has already covertly assisted the Assad government by passing on intelligence about the exact location of jihadi leaders through the BND, the German intelligence service, a source has told The Independent. This may explain why Syrian aircraft and artillery have been able on occasion to target accurately rebel commanders and headquarters.

Being a member of several Gulf Arab (and others) forums I was continually bombarded with the fable of US creation, and aid of Al Qaeda. Steve Coll’s incredible history, as well as Charlie Wilson’s War among others detail how we supported OTHERS in Afghanistan (such as Shah Massoud) but that a very large chunk was COMPELLED by Zia ul Haq to go directly to Pakistan and it’s ISI which DID create the Taliban and create the situation responsible for 9/11.
Cut to today.
Substitute Assad for ISI.
IN 1941 Churchill and FDR, not exactly wild supporters, joined Josef Stalin against Hitler. Although neither Cameron nor our prez qualify for that kind of leadership level or benefit of the doubt, today we don’t even HEAR a whisper of the consideration, of a plan to somehow cooperate with ASSAD to kill IS.
That’s for a VERY GOOD REASON.
This is a union that every American (and hopefully every Briton) recognizes as the PRIME EXAMPLE of George Washington’s warning to AVOID FOREIGN ENTANGLEMENTS.
It is CLEAR if you read Washington and the actual text of his warning he sees them as contaminating to our way of life, and to morality in general.
I have already outlined a rough (and exceedingly bold) idea to end IS AND ASSAD and leave a new world in it’s wake.
I have no idea if this CAN be done at all, but if there was EVER a moment to solve things ‘OUT OF THE BOX’, we have arrived at one.
If this solution seems impossible, then we need to bring about that set of conditions which MAKE IT possible
Aiding ASSAD would only bring us to a tactical victory over IS AT BEST. Assad would have the strategic win, and go on slaughtering his own people and making bombs and war on those around him.
Obama wanted to leave a different and improved world in his wake.
Joining with Assad to bring down IS and leave him there would not only NOT MAKE THE WORLD BETTER as a legacy, it wouldn’t even get us back to where we were in Jan 2009.
Unfortunately, this kind of struggling incompetence as a reaction to the imperative to avoid American casualties is PRECISELY the kind of error set we have seen with this man over and over and over.
Listen to the old white guy, Obama, this one time.