More On Roterham Rapes: 'Muslim leaders fully aware of problem but did nothing': Pakistani community worker makes explosive claims on Rotherham's religious leaders who 'talked in mosques but not to police' 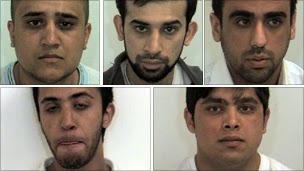 They knew about it for "a long time."

But they did not go to the Police.

They refuse to talk about it publicly.

THAT'S BECAUSE INFIDELS SHOULD NOT BE IN CHARGE OF PUNISHING MUSLIMS.

ONLY SHARIA LAW CAN DO THAT.

And in Sharia/Muslim nations, the courts and the police look the other way on Child Molestation.

So yeah. Why would we expect them to do anything about it?


Pakistani community leaders in Rotherham were complicit in hushing up the shocking ‘ethnic’ dimensions of the sexual exploitation rather than speaking out, it was claimed yesterday.

Parveen Qureshi, director of the United Multicultural Centre in Rotherham, revealed the shocking issue was widely discussed between leaders who were privately ‘trying to resolve the problem’.

She refused to name those who kept quiet, but was certain the problem of Asian men abusing white girls was known ‘for a long time’.

The abuse of at least 1,400 girls at the hands of Pakistani gangs in the South Yorkshire town for 16 years was shrouded in secrecy.

Yesterday Lord Ahmed, who has lived in Rotherham for most of his life, said it was now up to the ‘mosques and community leaders’ to teach ‘moral and ethical values’ lost to the younger generation.

Lord Ahmed, a member of the House of Lords who was Rotherham’s first Asian councillor, said yesterday: ‘I am deeply shocked by these heinous despicable crimes committed by young Pakistani men. ‘I do think that there’s a huge amount of responsibility that lies on the shoulders of the mosques and the community leaders because they are responsible for teaching ethical values and respect.

‘I came to Rotherham in 1969 when the first mosque was opened and we were taught moral and ethical values and mixed with the community. ‘If someone had a call from the police, people would be embarrassed and ashamed.’ He said he was now ‘worried for Rotherham’ in the wake of the child abuse scandal.

He added: ‘The majority of British Pakistani men are stuck between criminals involved in these problems and a few hundred that are involved with other issues like terrorism or other criminal activity.’

By the way, lest any of us bask in our offense, feeling proud that we Infidels don't do things like this, I say this:

A Society is judged ultimately by how it treats it's women and children, the weakest among us.

The fact that we do nothing in the wake of such heinous crime means that we are a sick and weak society indeed.

Men should not stand idly by while their women and children are raped.
Posted by Pastorius at 1:08:00 am

Barbarians only learn when they're met with their, or higher, level of barbarity. Send these animals to prison where the tax payers pay for them to eat three-square meals for the next 10, 20 years? How does that change anything? I am willing to bet these pieces of turd are already on welfare!

Parveen Qureshi, director of the United Multicultural Centre in Rotherham, revealed the shocking issue was widely discussed between leaders who were privately ‘trying to resolve the problem’.
She refused to name those who kept quiet, but was certain the problem of Asian men abusing white girls was known ‘for a long time’.

That would mean she also knew about this yet kept quiet and on top of that, now she's trying to protect the bastards who aided and abetted these animals. Shouldn't she be taken in for questioning and water boarded if she doesn't talk?

The answer is yes, she should be waterboarded, no matter what.