The Story Behind The Photo

Aliaa Magda Elmahdy, Egyptian feminist blogger living in Norway, created the controversial image that she published Saturday (Image source: Aliaa Magda Elmahdy/Facebook).
Using the Islamic State’s own social media tactics against them, an Egyptian-born feminist activist posted a picture Saturday of herself and another female defecating and menstruating on the Islamic State flag while nude.
The ISIS terror group is known for using social media to issue threats from all over the world, but Aliaa Magda Elmahdy, a well known Egyptian social activist and blogger, raised the stakes Saturday by posting a photo of the ISIS flag being desecrated, according to the Inquisitr.
In the graphic image, the 23-year-old activist is shown facing the camera in a squatting position while apparently menstruating on the flag, while the other woman, dressed in a black hijab with her back to the viewer, is also squatting and defecating on the banner.
Elmahdy posted the photo to Facebook Saturday in what appears to be a protest against the Islamist terror group’s recent advances in northern Iraq and Syria, Times of Israel reported.
Just behind the women and flanking the flag sit two — presumably — plastic machine guns, and the veiled woman is holding up her middle finger over her shoulder. The letters IS are written on Elmahdy’s stomach and on the second woman’s back side just above her buttocks.

(Image source: Aliaa Magda Elmahdy).
Arab media has avoided publishing the photo, since the words ‘there is no God but Allah’ are printed on Islamic State banner, and Elmahdy has already received death threats in response to the post.
Aliaa Magda Elmahdy @aliaaelmahdy Follow
be careful, you are chased ... — Another death threat http://ask.fm/a/b913plcg
Salahuddin @KhalidIbnOmar11 Follow
May ALLAH DESTROY Aliaa Magda Elmahdy, EGYPTIAN FEMINIST!!.. For the disgusting insult on flag of Tawheed..
But Elmahdy also has thousands of supporters who have expressed their thanks to the activist via social media. 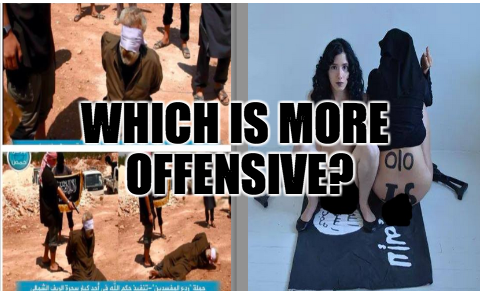 To every1 offended by @aliaaelmahdy #ISIS actions, ask urself which is more offensive, really? Mass murder or nudity?

@femeninna @aliaaelmahdy This is too aggressive and mentally ill. May I suggest decapitating journalists to come across as respectful?

@aliaaelmahdy You are a heroic artist and an inspiration!

Elmahdy told TheBlaze she would provide an explanation Monday why she took the photo.
When she posted it Saturday the activist did not specify details, but past controversies such as a 2011 incident in which she posed in only stockings and red shoes for her blog to protest against Egypt’s conservative culture suggest the Islamic State defecation move was also in opposition to the terror group’s brutally restrictive and misogynistic ideology, according to the Inquisitor.

In 2011 Elmahdy received criticism for publishing this photo in protest of Egypt’s conservative culture (Image source: Aliaa Magda Elmahdy/Facebook)
Elmahdy claims her feminist art and photos “scream against a society of violence, racism, sexism, sexual harassment and hypocrisy.” She is also widely known for protesting against religion in general.
Facebook has apparently removed the photo several times for decency considerations, according to one of Elmahdy’s followers. He writes, “I have a feeling Facebook will shut down this profile in a not too distant future. That is because I refuse to stop sharing the protest against ISIS … the photo is censored and should therefore not be against Facebook standards. Still Facebook seem to let the moral-fascists win and they keep removing it as I keep reposting it.”
Though the image isn’t currently found on Facebook, Elmahdy posted a direct link to a less-censored version of the image on LiveLeak.
Posted by midnight rider at 5:09:00 pm

Please pass on to this brave woman, if you have contact with her, to please be careful, and consider moving to the USA! I fear for her young life! Sharon Ostberg (I'm on www.facebook.com under my name)