IS THIS PARIS/CHARLIE HEBDO HAPPENING IN TEXAS???

Tammy Swofford is at the scene, contacted AoW. Has since been forced (by authorities?) to hang up.  AOW here...I am updating as I am able to do so at the bottom of this blog post.

FREEDOM OF EXPRESSION EVENT APPARENTLY UNDER ATTACK IN TEXAS

A spokesman for Garland ISD has confirmed that gunfire was reported at an anti-Islam event at the Curtis Culwell Center in Garland ISD.

Initial reports indicated that shots were heard outside the facility where an art show devoted to caricatures of Muhammad was being held.

WFAA-TV (Channel 8) has said an officer was involved in the shooting, and there are reports that SWAT officers had responded to the incident.

KXAS-TV (NBC5) says Garland police were still working to secure the area, and there were reports that officers had sealed the doors to the center.

Opponents had said the American Freedom Defense Initiative's Muhammad Art Exhibit and Contest on Sunday would be an attack on Islam. But its organizers said they were simply exercising their right of expression.

The contest, which was offering a top prize of $10,000, has received about 350 entries depicting Muhammad. Caricatures of the Islamic prophet are considered offensive by many Muslims.

In January, a French newspaper that published such cartoons was attacked by terrorists and 12 people died.

As part of its contract with the district, the American Freedom Defense Initiative has paid $10,000 for extra security - nearly $50 for each of about 200 tickets that have been purchased so far. That cost doesn't include private security the group is employing.

AOW cutting in here: The bomb disposal unit has arrived; apparently, two devices were found. Those attending the event have been moved to a safe place and are under armed guard.

The explosive devices are believed to be in the parking lot where those attending the event are parked. Attendees are not allowed to go to their vehicles; buses are being brought in to take the attendees away from Curtis Culwell Center.

While waiting, the attendees are singing "God Bless America," "The Star-Spangled Banner," and other patriotic songs.

I got this information from Tammy Swofford, who is on the ground there and is attending the event.

AOW again...Heavy.com has this information.


Two men with rifles and backpacks attacked police outside our event. A cop was shot; his injuries are not life-threatening, thank Gd. Please keep him in your prayers. The bomb squad has been called to the event site to investigate a backpack left at the event site

AOW here...The lights have now gone off in the safe room. This information via Tammy Swofford, who is on the ground there.

She sent this picture 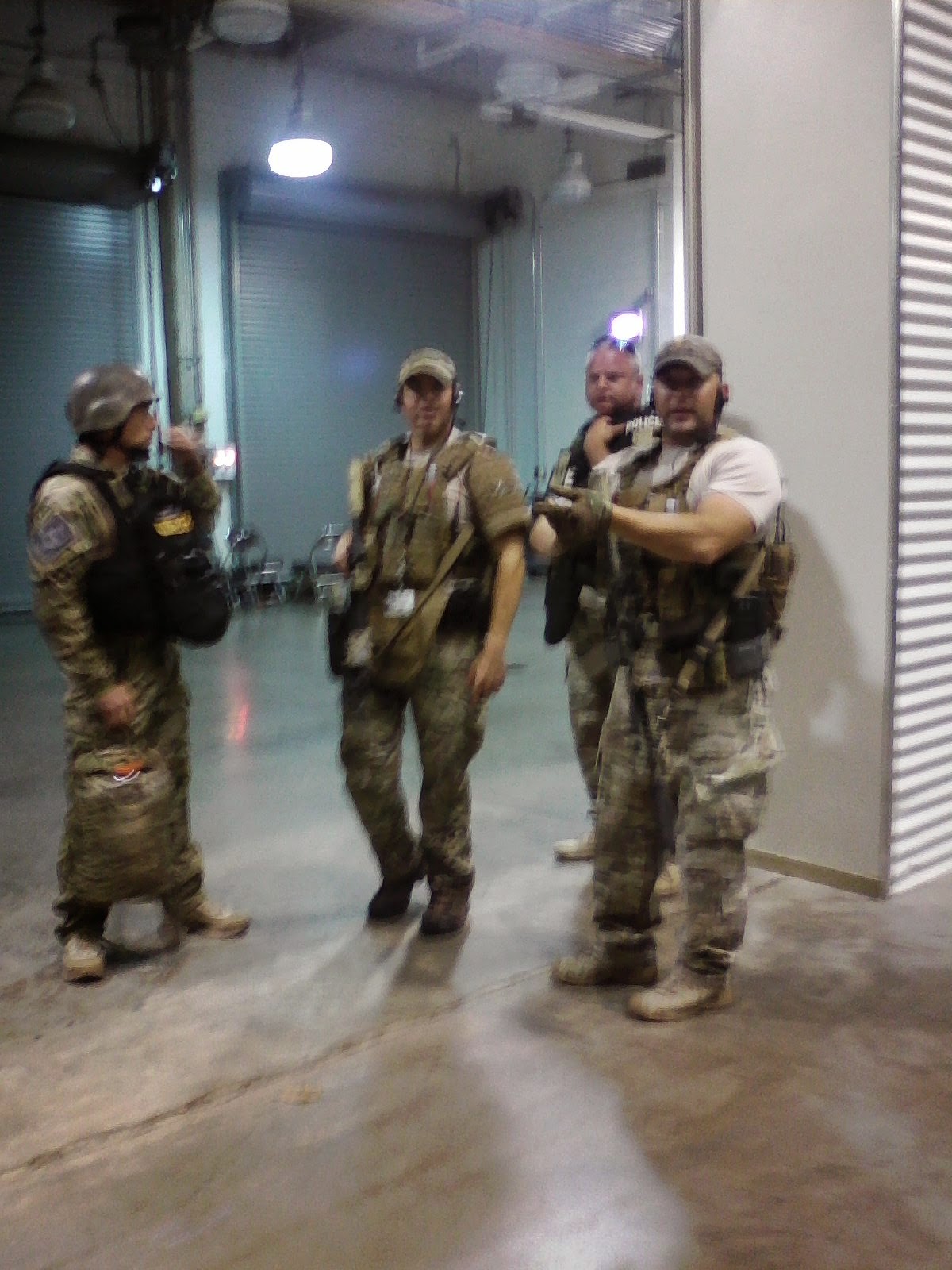 UPDATE - For some reason blogger is not posting our updates.

UPDATE FROM PASTORIUS - I have to wonder if the Police/authorities are trying to send this story down the rabbit hole by forcing our correspondent Tammy Swofford to turn off her phone and then corraling all attendees into a safe room, AND THEN TURNING OFF THE LIGHTS!

ANOTHER UPDATE - Jihad Watch's site is now inaccessible. It could be that there are too many people attempting to get their news there and the site crashed.

IF THAT IS THE CASE, THE QUESTION IS, IS THIS A COORDINATED ATTACK?!?!?!?

UPDATE - GOOD NEWS - JIHAD WATCH IS BACK UP - PAMELA GELLER IS POSTING AT JIHAD WATCH BECAUSE ROBERT IS IN LOCKDOWN AT THE CARTOON CONTEST FACILITY.

UPDATE - At Fox News, commentator Harris Faulkner is getting worked up about this story. She is a conservative black lady, and she's hot, and she seems to cognizant that this is a big, big story.

MY QUESTION IS, HOW DO WE AS FREE PEOPLE LIVE WITH MUSLIMS WHEN THIS IS WHAT HAPPENS WHEN WE CRITICIZE THEIR RELIGION?

In a free society, all loci of power need to be criticized. It is part of our system of checks and balances. It is absolutely necessary that we be free to criticize all religions, businesses, academic insitutions and  government officials.

That is a necessary part of freedom.

If we are importing Muslims by the tens and hundreds of thousands, granting them political asylum, this is what we are going to get.

It is not that all Muslims are Jihadists. But a percentage of them are. Look in our sidebar under "Game Over". There are 10 posts there featuring statistics that will show you what percentage of Muslims in various countries around the world, including the West, hold anti-Freedom ideas.

That is the percentage we are dealing with.

and that is why this is happening.

We can not live with this. We can not abide it for one second. 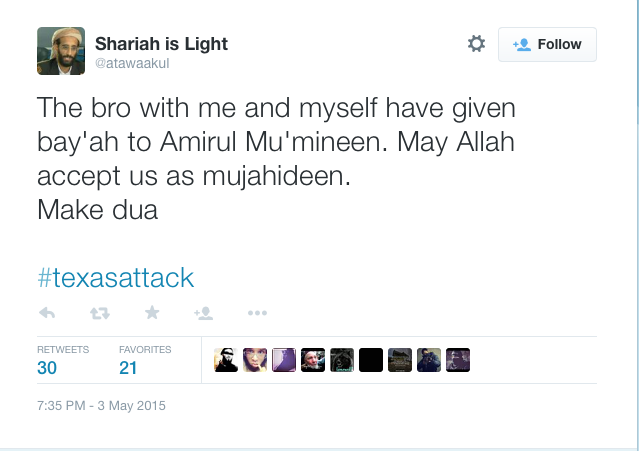 UPDATE - THE ATTACKERS HAVE BEEN KILLED

Not the best place in the world to get your Jihad on. Sounds like they barely made it out of their car before they were mowed down.

Too bad, huh? Allah is buttfucking them in hell with his little corkscrew pig dick.

AOW,
Thank you for being my life line, phone buddy - for this long night.

The two men were on foot at the point they were stopped with lethal force.

We were moved in convoy from the event center with escort due to fear of a "second wave" type attack. I am not going to give out the information on where we were staged for our second secure location.

I shared a taxi with Pamela Geller's photographer for the event and am out a hundred bucks for that lil' venture. Hopefully tomorrow all attendees can return and pick up our vehicles. It is still an active crime scene.

Geert Wilders was a marvelous speaker on Freedom of Expression. I did not realize he was so eloquent.

I was part of a much larger media configuration: CNN, CBS, Brietbart and Daily Beast were part of the crowd which I mingled with tonight.

But I do not regret attending this event, albeit the results could have been much worse. Approximately a dozen individuals were heading to their cars when the attack was initiated. One older lady was quite overcome with emotion. Overall, we held up fairly well.

RT -- when news broke and AoW called me I was viewing that very video for a potential future music post!

strange video of the 'event' can not be embedded to start at time of 'assault' taking place. I've tried 3 different codes. You can only embed the complete video.