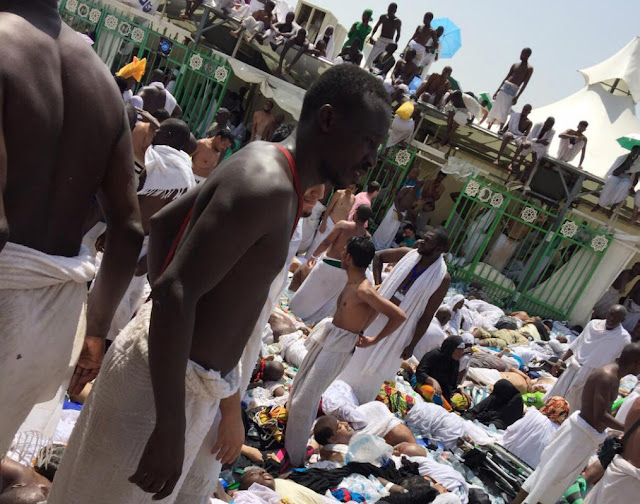 Allah is a very thirsty god:


MINA, Saudi Arabia (AP) — A horrific stampede killed at least 717 pilgrims and injured hundreds more Thursday on the outskirts of the holy city of Mecca in Saudi Arabia, the deadliest tragedy to strike the annual hajj pilgrimage in more than two decades.

At least 863 pilgrims were injured in the crush, said the Saudi civil defense directorate, which provided the death toll. The tragedy struck as Muslims around the world marked the start of the Eid al-Adha holiday.

It was the second major disaster during this year's hajj season, raising questions about the adequacy of measures put in place by Saudi authorities to ensure the safety of the roughly 2 million Muslims taking part. A crane collapse in Mecca nearly two weeks earlier left 111 people dead.

Saudi Arabia takes great pride in its role as the caretaker of Islam's holiest sites and host to millions of pilgrims annually. But the hajj poses an immense logistical and security challenge for the kingdom given the sheer number of hundreds of thousands of people — from differing linguistic and cultural backgrounds, many of whom have saved for years for a once-in-a-lifetime opportunity — intent on following the same set of rituals at about the same time.

Thursday's crush happened in Mina, a large valley about 5 kilometers (3 miles) from Mecca that has been the site of hajj stampedes in years past. Mina is where pilgrims carry out a symbolic stoning of the devil by throwing pebbles against three stone columns.

I guess that whole "Stoning of the Devil" thing didn't work out that well.


About the Stoning of the Devil:


The Stoning of the Devil (Arabic: رمي الجمرات‎ ramī aj-jamarāt, lit. "stoning of the jamarāt [place of pebbles][1][2][3]") is part of the annual Islamic Hajj pilgrimage to the holy city of Mecca in Saudi Arabia. Muslim pilgrims fling pebbles at three walls (formerly pillars), called jamarāt, in the city of Mina just east of Mecca. It is one of a series of ritual acts that must be performed in the Hajj.

On Eid al-Adha (the 10th day of the month of Dhu al-Hijjah), pilgrims must strike only one of the large jamrah with seven pebbles. After the stoning is completed on the day of Eid, every pilgrim must cut or shave their hair. On each of the following two days, they must hit each of the three walls with seven pebbles, going in order from east to west. Thus at least 49 pebbles are needed for the ritual, more if some throws miss.

Some pilgrims stay at Mina for an additional day, in which case they must again stone each wall seven times. The pebbles used in the stoning are traditionally gathered at Muzdalifah, a plain southeast of Mina, on the night before the first throwing, but can also be collected at Mina.

The ritual re-enacts Abraham (Ibrāhīm)'s pilgrimage to Mecca as explained by the Muslim historian al-Azraqi: "When he [Abraham] left Mina and was brought down to (the defile called) al-Aqaba, the Devil appeared to him at Stone-Heap of the Defile.

The stoning of the jamarāt also represents the repudiation of man's self (an-nafs al-'amāra, literally the "internal despot") and the act of casting aside one's low desires and wishes. As one Islamic theologian states: "If one is able to crush al‑nafs al‑'amāra during the stoning of Jamrat al‑ʿAqaba (the Jamrah of Aqaba), then one has taken the next step in attaining closeness to Allah, and since between the servant and Allah there is no more than the distance of one step, if one has been able to take this step and make it past one's own low desires and wishes, then that which follows is the level of closeness to Allah. "

During those two or three days after the Eid that one is in Mina, one must stone the three jamarāt, meaning that one must trample upon his internal despot (an-nafs al-'amāra), the external despot of the Shaitan from the Jinn (Iblīs and those like him), and the Shayṭān from among the Humans (the enemies of religion and of humanity). "The stoning of the three jamarāt is, in essence, the trampling upon the despots and waging war against all of them.

When one focuses on them and the hatred for them, then one automatically focuses with complete attention upon one's self – and rightfully so – while stoning the jamarāt, one must focus entirely upon one's self.[6]

Incidents during the Hajj

The Stoning of the Devil ritual is considered the most dangerous part of the pilgrimage, as sudden crowd movements on or near the Jamaraat Bridge can cause people to be crushed.

On several occasions, hundreds of participants have suffocated or been trampled to death in stampedes.

An important step in managing crowds is the recent replacement of the jamarāt pillars by walls to ease and speed up the stoning. The bridge has also been widened in recent years to accommodate the ever-growing number of pilgrims who perform the Hajj each year.

Crowd conditions are especially difficult during the final day of Hajj, which is the day pilgrims leave the valley of Mina and return to Mecca for the farewell Tawaf (the final circumambulation of the Kaaba). According to hadith, Muhammad's last stoning was performed just after the noon prayer.

Many scholars feel that the ritual can be done any time between noon and sunset on this day; however, many Muslims are taught that it should be done immediately after the noon prayer. This leads to people camping out until noon and rushing out then to do the stoning.

These two factors are felt to be most responsible for a recent tragedy during the Hajj of 2006, in which a stampede killed at least 346 pilgrims and injured at least 289 more. This was despite several attempts by the authorities to inform pilgrims about the permissibility of staggering their visits to the jamarāt as well as instructing them to leave their luggage at their tents.

Adding to the confusion involved in the tragedy is the lack of co-operation on the part of pilgrims who do not leave the jamarāt area by the proper route, and therefore interfere with the movements of others who are arriving.

Another more severe and tragic stampede occurred in September 2015, when at least 717 people were killed and 863 others were injured at Mina, just outside the holy city. The stampede occurred when several groups of pilgrims converged at the intersection of two streets. This is the worst disaster of its kind in 25 years. The Saudi government began a $21 billion expansion project to increase capacity at the Grand Mosque in Mecca to 2.5 million people.

This happens almost every year. The Saudi government's official response is always the same: Insh'allah.

It's a pitiful, satanic death cult with millions stuck in it and no way out. In a sane world the elimination of Islam would be a priority.

Anonymous,
It's not a sane world. I recognize that fact and think that you do as well.

From worshiping a rock to being the first to get the perfect stone...eager, rambunctious suckers, aren't they?
Eid al-Adha 2015 just happens to be today, Thursday, September 24. The significance of the stampede and this is:
The Stoning of the Devil (Arabic: رمي الجمرات‎ ramī aj-jamarāt, lit. "stoning of the jamarāt [place of pebbles][1][2][3]") is part of the annual Islamic Hajj pilgrimage to the holy city of Mecca in Saudi Arabia. Muslim pilgrims fling pebbles at three walls (formerly pillars), called jamarāt, in the city of Mina just east of Mecca. It is one of a series of ritual acts that must be performed in the Hajj.

We all know "who" these devout worshipers consider the 'devil'. Only 717 suckers fell? Pity.

You know, I'm not clear who they think is the devil.

I think it's the Jews.

Are there verses to support this idea, or is this one of the Muslim things left over from some kind of old Pagan ritual?

Here's the wiki on it. https://en.m.wikipedia.org/wiki/Stoning_of_the_Devil