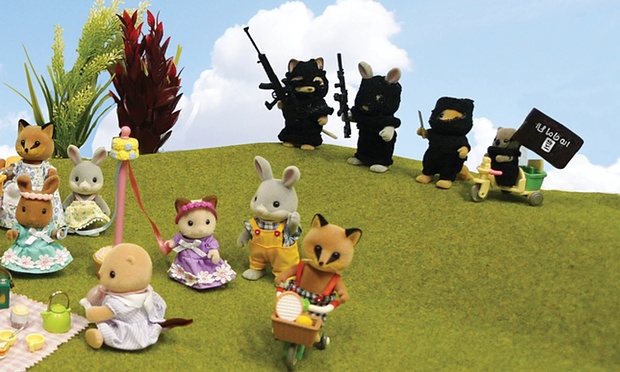 
Visitors to a London exhibition celebrating freedom of expression this week found plenty of familiar taboo-busting work, from Jamie McCartney’s The Great Wall of Vagina, an eight-foot long cast featuring the genitals of 400 women, to Kubra Khademi’s video of an eight-minute walk she made through Kabul in Afganistan, dressed in lushly contoured body armour. But they will have looked in vain for one work detailed in the catalogue by an artist known only as Mimsy.

It was removed from the Passion for Freedom exhibition at the Mall galleries after police raised concerns about the “potentially inflammatory content” of the work, informing the organisers that, if they went ahead with their plans to display it, they would have to pay £36,000 for security for the six-day show.

IN OTHER WORDS, THE POLICE ARE MAKING THEM PAY A PROTECTION FEE.

THE POLICE ARE IN CAHOOTS WITH THE JIHADISTS IN A RACKETEERING ORGANIZATION.
Posted by Pastorius at 4:04:00 am

The police just happen to be there. They are part of the CULTURAL DENIAL which has resulted in an assault on individual freedoms, using INSTITUTIONAL rules which are designed for western democratic cultures.

There is another theocratic and totalitarian culture which is succeeding at destroying the culture which proudly has espoused rules which were designed to ensure EQUAL OPPORTUNITY, and instead have been morphed into a suicide pact.

Epa, I know that what you say is true, that they are just there as part of the denial.

Here's the thing, though:

We must start making people responsible for the evil in which they participate.

No longer can we tolerate the notion that, "I was only following orders" is sufficient to deny one's culpability.

These cops are working in tandem with Scuzlims to Islamicize the UK. The cops must disobey their orders, or the UK will continue the way it has.

Therefore we must call them on their shit.