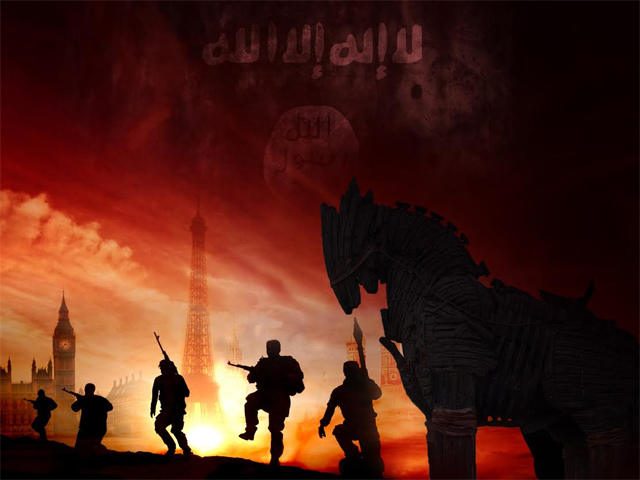 A 21-year old from Morocco has been arrested by German authorities at a refugee center near Stuttgart on suspicion of being an Islamic State recruiter. The man was sought under a European arrest warrant issued by Spanish authorities. He used a false identity to pose as an asylum seeker.
According to The New Observer, this is the first time German authorities have arrested a terror suspect masquerading as an asylum seeker.
At the same time it was reported the German government seized 10,000 fake Syrian passports, which are being sold to those seeking to gain entry to the EU for around $1,500 each. Possession of a Syrian passport makes claiming asylum a lot easier.


The huge figure was revealed today by Hungary’s minister for foreign affairs and trade Peter Szijjártó.
Speaking as the country begins work on its second fence to stop migrants heading across its border he predicted the current crisis will continue for years.
Mr Szijjártó told the Hungarian Times: “The name of the fence is ‘Temporary Security Border Fence’ but I think there is no question that in this case temporary means years.
“It’s a self delusion to call this situation a migration crisis; it is a massive migration of nations, with inexhaustible reserves.
“I don’t think that the analysis results, stating that 30-35 million people out there could possibly become migrants, would be an exaggeration.


Here are some "Refugees" who are angry because they are expected to actually be from Syria - you know, a real war-torn nation - and not just merely looking for handouts from the European welfare system:

Dennis Michael Lynch, producer of "They Come to America" illegal immigration documentary films was interviewed on Fox and Friends this morning. For some reason, this segment is not on their site at this point. However, Lynch previewed a segment of his latest film update, "They come to America III in which he questioned Donald Trumps 'fence' addressing the problem sufficiently. The segment is powerful. One sequence illustrated how ff 0:38, Canadian border patrol tipped off Lynch to come film individuals from a mosque at the lake's edge (Al-Rashid Islamic Institute) drive over the frozen lake into the US...and nobody says anything!
They Come to America III: The Cost of Obama's Legacy buy one copy get 2 free to share $19.95

Here's another link to an interview with John Stossel on 9/20.

There are a lot of things I don't like about Trump but the "border" is THE single existential issue of the 2016 election and no other announced candidate has a remotely acceptable position. How do I NOT vote for him?