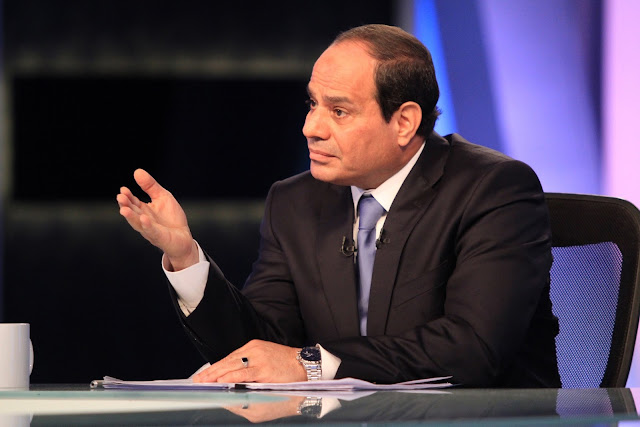 
Egyptian President Abdel Fattah al-Sisi has called on the Middle East region to unite against terrorism as well as invest in efforts to end the Israeli-Palestinian conflict.

In a wide-ranging interview with The Associated Press on Saturday night, Sisi said all countries in the region needed to cooperate to vanquish the intensifying terrorist threat that has led to a "ferocious war" in Egypt.

Sisi warned countries faced "sliding into failure" if the Islamic State terror group were not defeated, adding that Egypt's own military needed to be "augmented" to combat ISIS-affiliated terrorists in Sinai.

Egypt's President then urged countries in the region to renew efforts to solve the Israeli-Palestinian conflict via a two-state solution.

According to Sisi, Egypt's nearly 40-year-peace with the Jewish state should be expanded to more Arab countries in the region.

Resolving the conflict, Sisi added, could "change the face of the region and...bring about enormous improvement to the situation...I'm optimistic by nature and I say that there is a great opportunity."

*** I will no longer post links to site whose advertising is so burdensome that it slows down my computer. If you want to read the rest of the article, copy and paste part of the story and Google it yourself.
Posted by Pastorius at 3:56:00 pm

He is correct. He is also doomed. What he wishes to accomplish cannot be achieved in the context of Islam. He does not seem to realize that hard, unshakeable fact.

For Egypt to emerge from its self-imposed slum it must throw off the Islamic yoke.

I believe Al-Sisi, as much as I admire his intentions, will be assassinated just like Sadat. Islam is too deeply ingrained and it's pathologies too wide spread to be overcome.

But I pray I'm wrong! There are two nations that have at least a slim chance at rehabilitation: Egypt and Iran. Because they each have a cultural past that is both unique and separate from Islam. A reawaking is possible. Islam is of the Arab, perhaps at least the non-Arabs can ultimately throw it off.

So I keep praying.