Ahmed said he "invented" a "clock".

In fact, all he did was take the workings of an existing clock out of it's casing, reassemble them part way, and then insert them into a Pencil Box.

Here's a photograph of the "clock" Ahmed "invented". 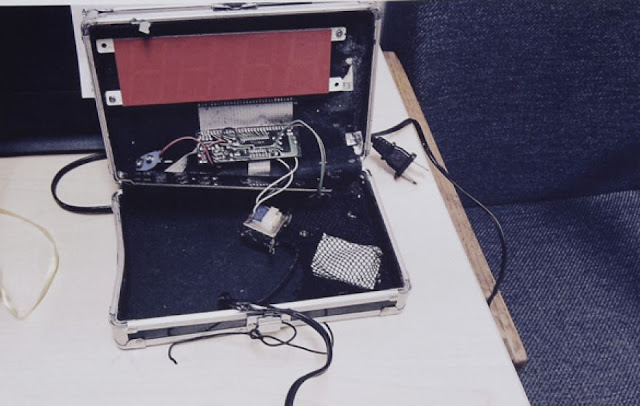 Barack Obama was fooled by this.

Mark Zuckerberg was fooled by this.

Hillary Clinton was fooled by this.

Apple's Steve Wozniak was fooled by this.

MIT was fooled by this.

Microsoft was fooled by this.

Ahmed got goodies, invitations, and accolades from all these brilliant people and more.

These are the same people who tell us, Global Warming is real. The Science is Settled.

These are the elites who want take our money and tell us how it should be redistributed.

These are the wise people who would presume to shape our future.

And they can't even tell when a 14 year old brat with a chip on his shoulder is scamming them.
Posted by Pastorius at 2:11:00 pm

I invented a computer. I bought the parts and put them in a case. AND I'm brown! Where's my White House invite yo?!?!?!

You're not the right kind of brown person.

Your attitude is more like a white person. You know, you're like an Uncle Mo' or something.

Apparently "you didn't build that!" only applies to non-Muslims.

The analogy to 'the science is settled' is perfect! Reposted at FreeRepublic