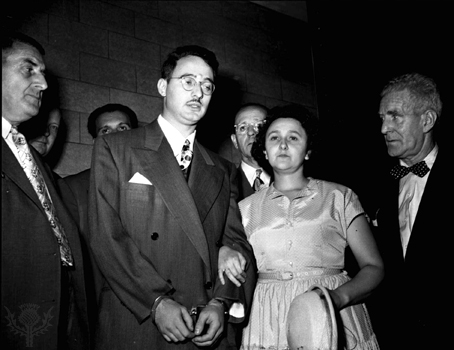 
Ethel Rosenberg, who was executed with her husband for treason in 1953, was honored Monday by the City Council on what would have been her 100th birthday.

Three council members joined Manhattan Borough President Gale Brewer in issuing two proclamations lauding Rosenberg, a Lower East Side resident, for “demonstrating great bravery” in leading a 1935 strike against the National New York Packing and Supply Co., where she worked as a clerk.

The proclamations also said she was “wrongfully” executed for helping her husband, Julius, pass atomic secrets to the Soviet Union.

“A lot of hysteria was created around anti-communism and how we had to defend our country, and these two people were traitors and we rushed to judgment and they were executed,” said Councilman Daniel Dromm (D-Queens).

Proving, once again, the Labor Movement was infiltrated with Communists - like the Rosenberg's, in this case.

Here's the truth about the Rosenberg's and their passing of nuclear secrets:


All those who treasure America’s liberties should solemnly observe the 60th anniversary this week of the execution of Communist spies Julius and Ethel Rosenberg.

Given that the Soviet Union they spied for is no more, why are the Rosenbergs still important?

They continue to matter because they remain part of the Left's anti-American mythology.

The Left denied the treachery of its pseudo-martyrs for decades, arguing that they were condemned to death in a wave of anti-Communist hysteria. This lie permeates American culture even today -- in movies, plays, and literature -- decades after Ron Radosh's painstaking research conclusively established the Rosenbergs' guilt.

Electrocuted at Sing Sing on June 19, 1953, the penalty they paid was more severe than the sentences handed down to other American traitors such as Alger Hiss, Robert Hanssen, and Aldrich Ames, who similarly jeopardized the nation by passing sensitive data to the Soviet Union during the Cold War. But the punishment meted out to the Rosenbergs was just because their actions led to the deaths of who knows how many Americans.

The Rosenberg spy ring gave the USSR sensitive information about U.S. air capabilities in the Korean War and the secrets of the A-bomb, allowing our totalitarian enemies to develop nuclear weapons years earlier than they otherwise would have. These spies helped to change the balance of power in the world and emboldened the irredentist Soviet Union as it became a superpower and went on the march enslaving tens of millions in Eastern Europe.

The Rosenberg saga, which cleared the way for the meteoric rise of Sen. Joseph McCarthy and his high-profile investigations into anti-American activities by U.S. citizens, unfolded during the so-called Red Scare of the 1950s, a relative nonevent that gave imaginative radicals something to whine about for years as they indulged their persecution complex.

"In the entire Cold War period less than two hundred leaders and functionaries of the [Communist] Party ever went to prison, in most cases serving less than two years," David Horowitz writes in Radical Son: A Generational Odyssey.

"This was not a small number or an insignificant price to pay for their political allegiances. But, considering the Party's organizational ties to an enemy power armed with nuclear weapons poised to attack America, it was not a large one, either."

Hollywood, long a hotbed of radicalism, came to the Party's rescue, serving as a huge Soviet echo chamber. The dream factory helped the Communist cause by churning out product that falsely depicted anti-Communists as vicious opportunists conducting politically motivated witch hunts.

Does this sound familiar, my fellow counter-Jihadists?


Because the Rosenbergs were unabashed Communists who didn't hide their admiration of Stalin's Soviet Union, the Left ran to their defense, using rationales that shifted over time as more and more damning evidence surfaced against the couple. When the Rosenbergs' guilt could no longer be disputed, their defenders pivoted, saying they had noble intentions and that the information passed on to the Soviets was junk.

These are all lies.

It is important to understand what the Rosenbergs actually did.

Specifically, the Rosenbergs were "motivated by loyalty to the Soviet Union, not opposition to fascism as their defenders claim," Radosh explains. The Rosenberg spy ring "provided vast quantities of technical data to the Soviet Union that helped it achieve near parity with the United States in the skies over Korea and Vietnam."

"When the Cold War turned hot in Korea, this technology was used to kill American soldiers," he writes. For example, the purloined information was "probably used in the design of the Russian high-tailed MiG fighter jet that was deployed in Korea against American airmen."

"Rosenberg himself gave his Soviet handler Alexander Feklisov the proximity fuse, which was used to track Francis Gary Powers’ U-2 plane and to shoot it down during the Eisenhower administration," Radosh writes.

The Rosenberg network "passed on the 12,000 page blueprints for the Lockheed P-80 Shooting Star, airborne radars for nighttime navigation and bombing," and for innovations in radar technology.

“Rosenberg’s band of amateur spies turned over detailed information on a wide range of technologies and weapon systems that hastened the Red Army’s march to Berlin, jump-started its postwar development of nuclear weapons and delivery systems, and later helped Communist troops in North Korea fight the American military to a standoff.”

In sentencing the Rosenbergs, Judge Irving Kaufman was unsparing in his criticism:

"I consider your crime worse than murder. Plain deliberate contemplated murder is dwarfed in magnitude by comparison with the crime you have committed. In committing the act of murder, the criminal kills only his victim. The immediate family is brought to grief and when justice is meted out the chapter is closed. But in your case, I believe your conduct in putting into the hands of the Russians the A-bomb years before our best scientists predicted Russia would perfect the bomb has already caused, in my opinion, the Communist aggression in Korea, with the resultant casualties exceeding 50,000 and who knows but that millions more of innocent people may pay the price of your treason. Indeed, by your betrayal you undoubtedly have altered the course of history to the disadvantage of our country."

Arguably the most insidious untruth that emerged over the years from the ever expanding crazy-quilt of rationalizations generated by Rosenberg apologists was that the U.S. government executed the couple for their political ideas. This falsehood has been regurgitated over and over and over again in popular culture, unchallenged by facts.

Leftists use the Rosenbergs' story to attack all mid-century efforts to counteract subversive activity. They deny that Americans were ever justified in worrying about Communist infiltration or that the U.S. government was justified in prosecuting Communist spies like the Rosenbergs. But the historical record has confirmed that, as John Haynes, Harvey Klehr and Alexander Vassiliev have documented in their book,  Spies: The Rise and Fall of the KGB in America, Soviet agents did in fact heavily penetrate the U.S. government, the Democratic Party, organs of culture such as Hollywood and Broadway, the news media, and the scientific research community.

Despite the facts, however, the Left continues to falsify history and to use its playbook to discredit its political enemies with slander and lies. But in terms of the Rosenbergs, and so many other traitors who helped to advance the Communist cause, the historical facts cannot be disputed. And despite the Left's denial regarding these two traitors, one fact remains clear: Julius and Ethel Rosenberg were guilty -- and they deserved what they got.

AND THEN THERE'S THE VENONA INTERCEPTS (intercepted messages going between the USSR and Communist spies here in the U.S.):

This cable documents the act that eventually led to the downfall of Julius and Ethel Rosenberg and their execution in 1953—namely, the recruitment of Ruth Greenglass, Ethel's sister-in-law. Ultimately, it was Ruth and David Greenglass who implicated the Rosenbergs, who became the only persons put to death for espionage in the U.S. during the Cold War.The Greenglasses were ardent Communists. During the war, David was drafted and became a skilled machinist in an Army ordnance unit. He was transferred to Los Alamos in August 1944, the same month as Klaus Fuchs. There he joined a group that designed models of high-tech bomb parts, including implosion detonators for the plutonium bomb, the type eventually dropped on Nagasaki.
Ruth Greenglass told Julius Rosenberg about her husband's work. By then, Julius ("Liberal" in this cable) was heading up a sizeable group of spies working for the Soviets. As the cable suggests, Julius set about recruiting Ruth to join his group, with an eye to eventually pulling in her husband (see also November 14, 1944 cable). In this cable, Ruth's name is in clear text, because she's just being introduced to the Soviets; soon she would be given the cover name Osa ("Wasp"). In November, David wrote a letter to his wife saying he "most certainly will be glad to be part of the community that Julius and his friends have in mind." And so he was, under the cover name Kalibr ("Caliber").Just as Klaus Fuchs' confession led the FBI to Harry Gold, so did Gold's confession guide them straight to David Greenglass. Gold told the FBI that while most of his trips to Los Alamos were to pick up goods from Fuchs, he once received materials from someone he described, according to his FBI interrogators, as "a soldier, non-commissioned, married, no children (name not recalled)."When the FBI confronted David Greenglass, he confessed. Not one to bear up well, he also implicated not only Julius Rosenberg but also his own wife. Ruth, when questioned, corroborated her husband's statements about Julius' recruiting. Later, the Greenglasses also implicated Ethel, claiming she knew all about Julius' spying activities and even typed up espionage-related documents for him.
GO READ THE WHOLE THING.
Posted by Pastorius at 2:48:00 pm