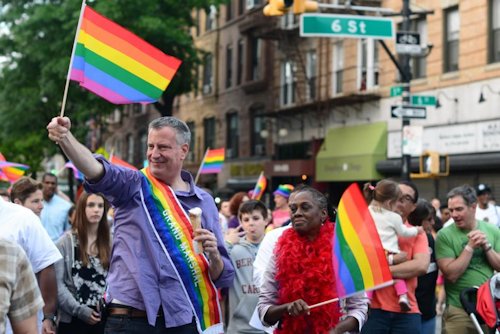 Step by step, my friends:


New York marks a milestone in the fight for equality Thursday (Sep 24) when 1.1 million children in America’s largest school district will take the day off to mark Eid al-Adha.

It is a small but hard-won victory at a time when American Muslims complain of growing Islamophobia and worsening anti-Muslim rhetoric following the 9/11 attacks in 2001.

For the first time, more than 1,800 public schools in New York will close for the Muslim feast of sacrifice, a day after also closing for Yom Kippur, the holiest day in the Jewish calendar.

Mayor Bill de Blasio unveiled the new policy in March, announcing that New York public schools would get two days off for Eid al-Fitr, which falls during the summer, and Eid al-Adha, in addition to major Christian and Jewish holidays.

Since then, city hall has added a further day off – February 8, 2016 – for Lunar New Year, celebrated by Asian-Americans.

“It is a huge victory to actually see the day come,” says Linda Sarsour, a member of the Coalition for Muslim School Holidays and a New York activist with three children.

“As an imam as well as a parent I am very happy,” agreed Imam Shamsi Ali, director of the Jamaica Muslim Center in Queens. “I’m sure this kind of policy from the government side will push Muslims further to feel a sense of belonging,” he said.