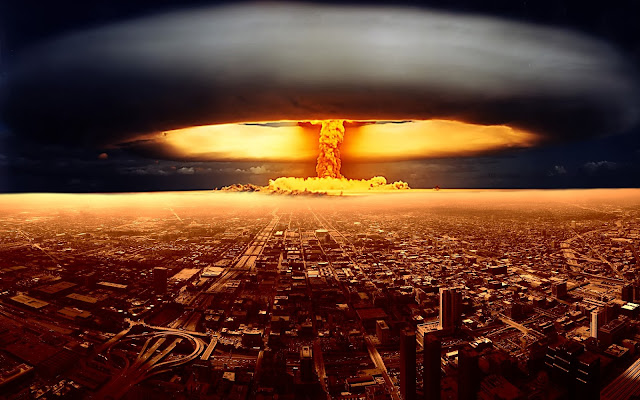 From the Washington Times***:


Nuclear annihilation across the globe. This is what a German reporter who successfully embedded with the Islamic State says the terror group is planning.

Jurgen Todenhofer released his findings in a book titled “Inside IS - Ten Days in the Islamic State,” reports the UK’s Daily Express.

“The terrorists plan on killing several hundred million people. The west is drastically underestimating the power of ISIS. ISIS intends to get its hands on nuclear weapons,” says Todenhofer, calling the group a “nuclear tsunami preparing the largest religious cleansing in history.”

“They now control land greater in size than the United Kingdom and are supported by an almost ecstatic enthusiasm the like of which I’ve never encountered before in a war zone. Every day hundreds of willing fighters from all over the world come.

They are the most brutal and most dangerous enemy I have ever seen in my life. I don’t see anyone who has a real chance to stop them. Only Arabs can stop IS. I came back very pessimistic.”

*** I will no longer post links to sites that are so burdened with ads that they slow down my computer. If you want to read the rest of the article, copy and paste part of the story and Google it yourself.
Posted by Pastorius at 3:23:00 pm

Quote from episode 108 of Outlander:

21:41 minutes in,
"It's fashionable in this modern age to dismiss the idea of good and evil, but there is evil, and it finds purchase in good men by giving sin the sweet taste of ecstasy. The Nazis drank from that poisoned cup thinking all the while they were slaking their
thirst with the sweetest wine. "

I suggest there are many that drink from that same cup today.

And some of them are on "our side"; men and women who seem to take glee in watching the destruction of our civilization.

IS has no corner on the drug of hatred.
They misjudge the human race.

I have friends in Latin America, and is truly disheartening to see how uninformed and leftists they are. We are alone.