Egypt's Mubarak to EU: Hamas must not be allowed to win

No wonder the Iranians want him dead.
The regime-run news agency, Fars News, reported on Sunday that the Iranians were offering a million dollar reward to the individual who assassinates Hosni Mubarak.
...That was before his comments from today. 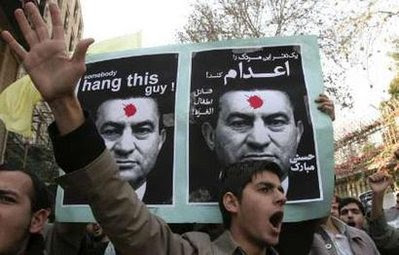 Demonstrators carry pictures of Egypt's President Hosni Mubarak as they shout slogans in front of The Interests Section of the Arab Republic of Egypt in Tehran December 8, 2008. Demonstrators were protesting Egypt's ties with Israel. (REUTERS/Stringer)

Egyptian President Hosni Mubarak stunned visiting foreign ministers Monday when he said he wanted Israel to emerge as the winner in the current conflict in Gaza.

The European foreign ministers, headed by Karel Schwarzenberg of the Czech Republic, whose country currently holds the European Union's rotating presidency, met with Mubarak in Cairo before travelling on to Jerusalem.

The ministers met with Israeli Foreign Minister Tzipi Livni after arriving in Jerusalem and briefed her on their discussions with the Egyptian president.

It was at that meeting that ministers confided that Mubarak had told them 'Hamas must not be allowed to emerge from the fighting with the upper hand.'

Hamas believes Egypt is trying to broker a ceasefire and sent a delegation to the city on Monday. Israeli Prime Minister Ehud Olmert meantime has told visiting French President Nicolas Sarkozy that Israel will not honour a ceasefire imposed by the UN Security Council. It will only honour an agreement that it agrees to, the Israeli prime minister told Sarkozy.