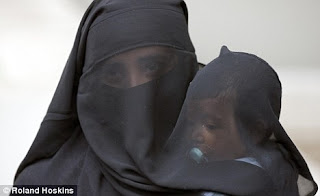 Al-Qaeda's North Africa wing threatened on Tuesday to take revenge on France for its opposition to the burka, calling on Muslims to retaliate against the country, the US monitoring service SITE Intelligencereported.

Earlier this month, President Nicolas Sarkozy said the burka, which covers the whole face, was not welcome in the strictly secular country.

"Yesterday was the hijab (the Islamic headscarf long banned in French schools) and today, it is the niqab (the full veil)," Abu Musab Abdul Wadud, head of Al-Qaeda in the Islamic Maghreb was quoted as saying.

"We will take revenge for the honour of our daughters and sisters against France and against its interests by every means at our disposal."

The group also called on Muslims to retaliate for what it called French "hostility" against the community and its attempt to obstruct Islam's practice on its territory.

"For us, the mujahedeen ... we will not remain silent to such provocations and injustices," Abdul Wadud said without elaborating, according to SITE.

"We call upon all Muslims to confront this hostility with greater hostility, and to counter France's efforts to divide male and female believers from their faith with a greater effort ... (by) adherence to the teachings of their Islamic sharia."

On June 22, Sarkozy said the burka was not a symbol of religious faith but a sign of women's "subservience," adding that the head-to-toe veil was "not welcome" in staunchly secular France.

The French National Assembly set up an inquiry into the rising number of Muslim women who wear the burka.

France is home to Europe's largest Muslim community and faces a dilemma between accommodating Islam and maintaining secularism. In 2004, it passed a law banning headscarves or any other "conspicuous" religious symbols in schools to uphold a separation between church and state.

Al-Qaeda number two Ayman al-Zawahiri criticized the law, saying the decision showed "the grudge the Western crusaders have against Islam."

"the grudge western crusaders have against Islam"

Hell yes we have a grudge and rightly so. What has Islam given to this world besides pain, suffering, oppression & death? Not a damn thing. I applaud France for having the guts to stand up against Islam and in this case, for women.

'Course hardly anybody is going to realize that until the shark swamps the boat.

This is nothing less than classy PR... taking revenge for sisters and daughters, what a spin.

Al Qaeda reminds me of a Muslim version of the Pope lately, they're really becoming an authority.

This is getting out of control -- for a moment there I thought that was a photo of Michael Jackson and one of his kids.

It could be for all we know.