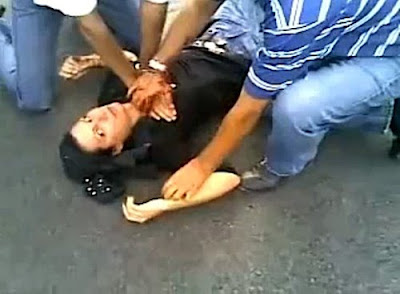 From Power and Control:

Neda Net has an interesting manifesto:

This is the resource page for NedaNet, a network of hackers formed to support the democratic revolution in Iran. Our mission is to help the Iranian people by setting up networks of proxy severs, anonymizers, and any other appropriate technologies that can enable them to communicate and organize — a network beyond the censorship or control of the Iranian regime.

NedaNet doesn't have leaders or a manifesto or even much in the way of organization. We're not affiliated with any nation or religion. We're just computer hackers and computer users from all over the planet doing what we can to help the Iranian people in their struggle for freedom.

NedaNet does have contacts on the ground in Iran. We are actively and directly cooperating with the revolutionaries (though for obvious security reasons most of us don't know who the contacts are). By helping us, you can help them.

Neda Net has links and advice explaining how you can pitch in.

Tehran Broadcast has a list of things the Iranian people need to carry on their revolution. This was sent out on 22 June.

1.Today we heard many people saying we can not win. Give us some spirit and motivation by reminding us of the important accomplishments made so far. Isn’t delegitimizing this government enough?! Is being united like this a small thing? Today, a Revolutionary Guard’s commander in Tehran was arrested because of his refusal to implement a crackdown order. Is this is a small triumph? We repeat, Help us maintain our spirits!

2. Invite terrified people to low cost actions; for example, pulling out money from governmental banks. Believe me but these days even wearing black in the working place (as a sign of mourning) is scary, let alone going on a strike. Please don’t criticize us for this. We did everything we could, everything within our powers, for a week. Think how you can convince a villager to pull out his/her money from the banks.

3.Don’t let state-run websites crush people’s spirit. Why didn’t you continue your DDOS attacks on the government news websites, such as Fars news? Do onto them what they are doing onto us! Please install the auto-reload plugin on firefox and bring their websites down again.

4.To create fear and frustration, the state TV, in a showmanship act, has asked people to send them pictures of the demonstrators. Explain to us, haven’t we already put our own photos and videos on the Internet?! In fact this is our strength, we should not be afraid. This is Islamic Republic TV’s psychological warfare.

5.By unfounded charges and accusations that foreign media are instigating chaos in Iran, the government has put them in a passive defensive position. Ask the foreign media to show our imperfect videos and reports. Governments, especially Obama should not remain neutral. They shouldn’t sell the people for the benefit of the rulers.

I don't know how much help Obama will be. But he did decide to disinvite Iranian diplomats to America's 4th of July Celebration after they had declined the invite. The Canadians are a little farther ahead of the curve.

Canada hardened its stance toward Iran on Thursday, denouncing the Islamic republic's appointment of a widely feared prosecutor to interrogate arrested reformists, and rescinding a Canada Day invitation that had been extended to Iranian envoys in Ottawa.

Foreign Affairs Minister Lawrence Cannon said Canada was "deeply concerned" about the appointment of Saaed Mortazavi, who is known in Iran as the "butcher of the press," and who gained notoriety for his role in the 2003 death of Iranian-Canadian photographer Zahra Kazemi.

"On several occasions, most notably in the detention and murder of Zahara Kazemi, Mr. Mortazavi has clearly demonstrated his disregard for human rights and fundamental freedoms," Cannon said.

And please do not forget to look at the Neda Net page and see if there is some where you can pitch in.

Go read more at Power and Control.
Posted by Pastorius at 2:24:00 am

This is great news! God bless freedom loving hackers everywhere! We will use the Net to fight tyranny!

If Bloggers are the Pampleteers of our time, then the hackers are the Minutemen.

And, we haven't even begun to bring out the big guns yet.