Khatami Says Rioters Should Be Executed 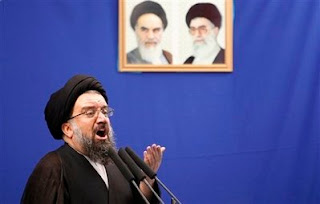 TEHRAN (Reuters) – A hardline Iranian cleric called on Friday for the execution of leading "rioters" to teach a lesson to the thousands who have protested against the June 12 presidential election result.

(EDITORS' NOTE: Reuters and other foreign media are subject to Iranian restrictions on their ability to report, film or take pictures in Tehran.)

Iran's top legislative body, the Guardian Council, said it had found no major violations in the election, which it described as the "healthiest" since the 1979 Islamic Revolution.

The council had already rejected a call for the annulment of the vote by moderate former Prime Minister Mirhossein Mousavi, who has led mass protests since he was declared a distant second in the election behind incumbent President Mahmoud Ahmadinejad.

"I want the judiciary to ... punish leading rioters firmly and without showing any mercy to teach everyone a lesson," Ahmad Khatami told worshippers at Tehran University.