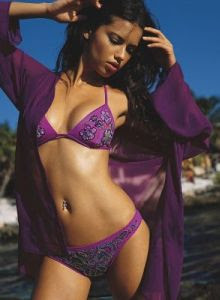 From Matt Simon at Power and Control:

Some of you may remember my article Defeated by Pornographywhere I discussed how modern technology was liquefying Islamic society. We can start with this amazing statistic:

Up to 70% of files exchanged between Saudi teenagers' mobile phones contain pornography, according to a study in the ultra-conservative Muslim kingdom.

Well the Saudis are at it again. This time with women's underwear.

RIYADH, Saudi Arabia — Using colorful bras donated by employees at Victoria's Secret, a group of 26 mostly Saudi women completed the first course of its kind to be offered in the kingdom _ how to fit, stock and sell underwear _ a training organizers hope will help boost a campaign to lift the ban on women selling underwear in the kingdom.

The graduates held a small ceremony at a college in the western seaport of Jiddah on Tuesday, capping 40 hours of instruction during which they learned to overcome their embarrassment at doing bra fittings, deal with customer complaints and display the stock in an appealing manner.

"It was a beautiful experience," said Faten Abdo, a 32-year-old coordinator in the offices of a lingerie company.

"The most shocking thing for me was the bra sizes," she added. "We didn't know how to get proper measurements before."

Now there is a class I'd like to take. As long as there was a lot of hands on experience. Besides my engineering training should give me a head start when it comes to measurement accuracy. The key is to keep measuring until you get a consistent set of measurements.

Suzanne al-Hindi, 33, one of 26 graduates, said she and the other women were "shy at first to play-role and do fittings on each other, but we got over it."

British consul-general in Jiddah Kate Rudd said she attended Tuesday's ceremony to show support for the idea that women should be allowed to play a more active role. "It was a small step, but perhaps from this little drop there will be bigger ripples," said Rudd.

Bigger WHAT? I believe Kate said ripples you boob. And what is this about underwear fitting as an RPG? Don't kids playDungeons and Dragons any more?

Is normal that the tecnology produces a increment of intimate practicals as see pornography and use of lingerie.