From Pastorius (hey, that's me) at the Astute Bloggers:
From the Wall Street Journal:

It seems that President Mel Zelaya miscalculated when he tried to emulate the success of his good friend Hugo in reshaping the Honduran Constitution to his liking.

But Honduras is not out of the Venezuelan woods yet. Yesterday the Central American country was being pressured to restore the authoritarian Mr. Zelaya by the likes of Fidel Castro, Daniel Ortega, Hillary Clinton and, of course, Hugo himself. The Organization of American States, having ignored Mr. Zelaya's abuses, also wants him back in power. It will be a miracle if Honduran patriots can hold their ground. 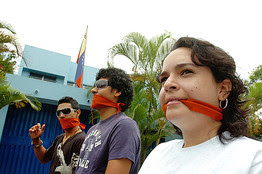 That Mr. Zelaya acted as if he were above the law, there is no doubt. While Honduran law allows for a constitutional rewrite, the power to open that door does not lie with the president. A constituent assembly can only be called through a national referendum approved by its Congress.

But Mr. Zelaya declared the vote on his own and had Mr. Chávez ship him the necessary ballots from Venezuela. The Supreme Court ruled his referendum unconstitutional, and it instructed the military not to carry out the logistics of the vote as it normally would do.

The top military commander, Gen. Romeo Vásquez Velásquez, told the president that he would have to comply. Mr. Zelaya promptly fired him. The Supreme Court ordered him reinstated. Mr. Zelaya refused.

Calculating that some critical mass of Hondurans would take his side, the president decided he would run the referendum himself. So on Thursday he led a mob that broke into the military installation where the ballots from Venezuela were being stored and then had his supporters distribute them in defiance of the Supreme Court's order.

The attorney general had already made clear that the referendum was illegal, and he further announced that he would prosecute anyone involved in carrying it out. Yesterday, Mr. Zelaya was arrested by the military and is now in exile in Costa Rica.

And yet, Obama stands against the removal of Zelaya, and, in fact, has been standing in support of Zelaya for the past several weeks:

In an unusual concurrence of views, the Obama administration and Venezuelan President Hugo Chavez said they still recognized Mr. Zelaya as Honduras’ president. The State Department called the events an “attempted coup” and urged Mr. Zelaya’s “return and restoration of democratic order.”

U.S. officials said they were engaged in multinational efforts to resolve the crisis, through the Organization of American States and European allies. At the same time, Washington wants a resolution “free from external influence and interference,” a senior official told reporters during a conference call organized by the State Department.

The official, who spoke on the condition that he not be named, said the U.S. Embassy in Honduras was “consistently and almost constantly engaged in the last several weeks working with partners” and that U.S. officials were “in contact with all Honduran institutions, including the military.” However, the military stopped taking the embassy’s calls since the coup attempt, the official said.

Let's get this clear:

1) Zelaya violated the Honduran Constitution against the express orders of the Supreme Court. For this, the Honduran military arrested him.

2) The Obama Administration calls this "an attempted coup" by the Honduran military.
3) The fact is, IT WAS PRESIDENT ZELAYA LEADING A COUP AGAINST THE CONSTITUTION OF THE NATION HE WAS ENTRUSTED TO LEAD.
It's as simple as that.
Take note, everyone. Obama stands with the Iranian government and the Honduran President, both of whom have attempted coups in the past few weeks. As of yet, Obama has not shown any inclination to stand for Constitutional Democracy. However, he has shown his willingness to side with Dictators.
Meanwhile, in America, we see that Obama is willing to take over entire corporations, violate the Constitution by running the Census from the White House, and attempt to dictate executive pay restrictions, all the while, also discussing the idea that we need a Civilian Security Force that is just as well-funded and equipped as the United States Military.
Why do you think that is?
I think this quote, from the Belmont Club, is instructive:

It was in Spain that Orwell realized the imminence of totalitarianism as only a person who has seen its advancing tentacles up close can. For Nazi Fascism and its senior counterpart, the Bolshevik Terror, were so fantastically brutal and corrosive that intellectuals in the West treated it with emotional disbelief, whatever credence their intellects might give it. The sheer effrontery of totalitarianism assisted its advance. The cries that “it can’t happen here”; “surely that’s impossible” lulled people in a false sense of security. Far worse was the delusion of thinking that one could refuse to go with the Gestapo or the NKVD when they finally turned up. CS Lewis wrote in the Screwtape Letters that the devil’s greatest trick was to vanish. When Orwell returned to Britain after almost dying on the Spanish battlefield, he went around the country debating against pacifists. His hardest problem was to convince them that the devil was real.

Thank you for blogging this. As I see the true loyalities of our nations president it sickens me to think that if we take the time to look at history, this will be us in short order. Folks need to take the rose colored glasses off and read...