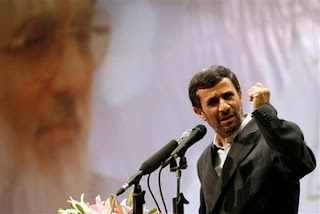 Someone put this guy out of my misery:

Iranian President, Mahmoud Ahmadinejadvowed Saturday to make the U.S. regret its criticism of Iran's postelection crackdown and said the "mask has been removed" from the Obama administration's efforts to improve relations.

Ahmadinejad — with his internal opponents virtually silenced — all but dared Obama to keep calling for an end to repression of demonstrators who claim the hardline leader stole re-election through massive fraud.

Ahmadinejad has no authority to direct major policy decisions on his own — a power that rests with the non-elected theocracy. But his comments often reflect the thinking of the ruling establishment.

Note that, after all the bullshit from the MSM about Democracy in Iran, here, in this AP article, the truth is coming out in full bloom. Ahmadinejad does not have control over the country. He is a tool of the Mullahs. As such, we can understand that the views he expresses are the views of the Mullahs.

That being said, this threat is likely more aimed at creating a Nationalistic frenzy by presenting the Great Satan (that would be America) as the scapegoat upon which the Iranian people can pour their wrath, thus relieving the Mullahs of the pressure.

Ain't gonna work, Mahmoud. It is clear the Iranian people (maybe we should start calling them Persians) have seen right through you losers.

Someone with good recording gear, please capture this phenomenon so it is not lost to the historical record.