One Gets What One Asks For

Today it made moderate headlines that Edward "Buzz" Aldrin of Second-Man-on-the-Moon fame had done what -- I believe -- passes for "Rap" among the young together with that unspeakable bit of human flotsam that goes by the moniker of "Snoop Dogg". I'm largely a stranger to this genre.

While this shows a deplorable drop in standards, it was, after all, just an old coot with (presumably) hair growing out of his nose and ears in a last grasp at some headlines, and now listen well to MY story: In Old Europe, two veritable foreign ministers, Frank-Walter Steinmeier and Bernard Kouchner, hit the bottom of the barrel of humanity when they, in November 2007, that was, "rapped" together for -- you've guessed it -- multiculiti as part of an "integration summit". As Snoop Dogg wasn't an option, an, as it is called, Germano-Turkish specimen of that genre did as well.

"Muhabbet" had summoned the two politicians to a studio in Kreuzberg, the quasi-Turkish suburb of Berlin, and they happily, numbly and dumbly obliged. 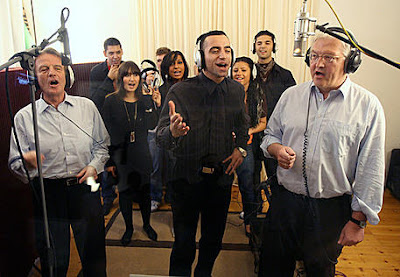 "We Germans need to open up a little bit more to the world", Steinmeier was quoted as saying while Kouchner wasn't ashamed of expressing great pleasure at adding some colour to the integration summit via such activity, and affirmed readiness for recording further songs.

"Everybody accepts that Germany is a country of migration. And we are the fruits of this migration", Muhabbet said.

Then the stellar example for integration came tumbling down, as stellar examples for integration tend to, when the journalist and filmmaker Esther Schapira made it public that she had been attacked at a pre-viewing of her film about the murder of Theo van Gogh by our paragon of assimilation virtue, who had stated that he'd have done the same and would have tortured van Gogh to boot. Not to forget that Ayaan Hirsi Ali deserved the same fate.

Steinmeier remained astonishingly sanguine and declared par ordre de mufti that Muhabbet was a good guy and called for calm. And indeed, Muhabbet is not an extremist, he is the mainstream.

People then had a closer look at his "lyrics" and discovered -- who would have thought so -- an abyss of obscenity, hate, racism, misogyny and homophobia, all things Muhabbet's vast followership, at least the ethnic German faction, abhors, but only if it comes from one of them. I am not averse to the odd expletive when it serves a purpose, but I won't translate that, so you'll have to believe me.

What does that teach us?

It teaches us that one gets what one asks for. Had Steinmeier and Kouchner performed German Lieder together with Thomas Quasthoff this wouldn't have happened.

It teaches us too that, when it comes to Islam, you get what you are asking for as well, namely Islam.

And it asks for some leniency for Buzz Aldrin.