With any luck at all, when t 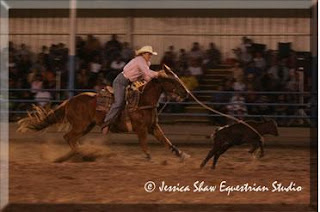 his posts I will be at the first rodeo of the season around here.

This is as Infidel as it gets.

The food: Pit Beef sandwiches dripping juices slathered with cheese and horseradish, carnival fries, cotton candy, chicken, waffles and ice cream, funnel cake loaded with so much sugar the little one is wired for days.

True story: several years ago daughter #2 & I went for some Pit Beef Sandwiches. They were perfect, started eating them as we were walking back. . .

I took another hearty bite. 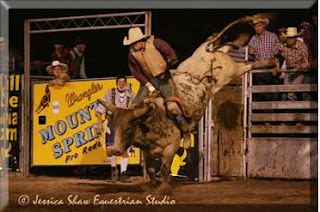 The crowd. All American. From hardcore rednecks to city folks. No one caring how silly they may look in their cowboy hats and boots.

The events. Barrel racing. Steer wrestling. Break away roping. And of course, bull riding, hanging for 8 seconds to a raging half ton animal determined to throw you off and stomp your insolent ass into the dust and mud.

We tend to sit close to the fence and almost always end up with a bit of mud and (oh yes) bullshit flung at us. Those cowboy hats ain't just for show, you know. 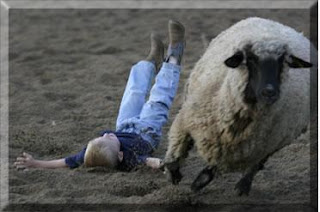 Mutton busting: little kids "saddle up" on a sheep and try to hold on for 8 seconds. Not so easy. Splat in the mud. Or hanging on for dear life as the sheep races straight out the gate and the kid is straight back, legs trailing behind like a cartoon character. Fame don't come easy.

Bull hockey: a bunch of really brave or stupid (take your pick) spectators enter the arena and, by clapping hands, waving arms and yelling, try to drive a bull between two barrels.

And , of course, the clowns. Who provide between rider & event entertainment but whose real job is to put themselves between the cowboy who just got off real hard and that half ton animal determined to stomp his insolent ass into the dust and mud.

The shows always start the same. The cowgirls enter the arena first, riding their barrel racing horses, stretching them a bit around the arena. Beautiful creatures. Yes, I mean the horses (ok, the girls, too). I usually don't know one from another but they are awesome to look at. Followed by the bullriders, clowns, pickup men and the rest. 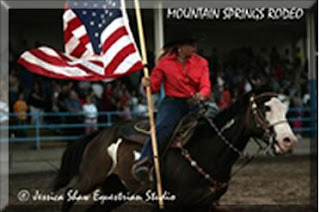 Then, usually on her own horse but occassionally on last year's champion (read: meanest nastiest ugliest roughest sonofabitch they had) bull, carrying a huge American Flag, is last year's Champion Barrel racer, a wild cacophony of cheering following her.

First, the Rodeo Cowboy's Prayer as well as a prayer for our troops, past and present.

Then, The Star Spangled Banner.

Several thousand people standing and every cowboy hat, trucker's cap and hand placed over their heart, saluting OUR flag.

(look, with this crowd, if you didn't, you'd have several thousand people determined to stomp your insolent ass into the dust and mud)

I love the rodeo.

But what can you expect from a city kid that married a farmer's daughter who used to dance the can-can on bartops in a place called The Gatling for a living?

Ain't that America, though.

Chris LeDoux
8 Second Ride
Posted by midnight rider at 1:00:00 am

Have a great time.

Enjoy it because if this administration gets its way, beef will be taxed to oblivion, rodeos circuses and zoos will be disbanded as unkind to animals and gatherings of more than three people will be investigated.

That food sounds so wonderful - and the best of all - yummy - funnel cakes!!!

I saw something interesting tonight. I drove by our local mosque and there were a bunch of people holding large "Persian" Iranian flags and holding green ribbons. I could not stop and inquire, and by the time I came back they were gone. I may try to call the mosque next week to see if they sponsored it. I am traveling, so it may need to wait til next weekend. Haven't seen the local news yet either.

It was in southwest Houston.