The Failure of Laicite 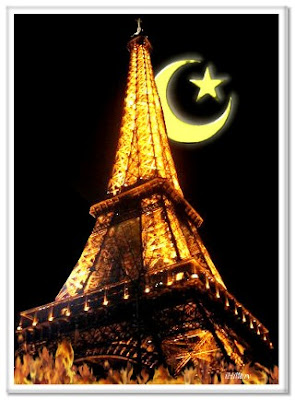 Sarkozy wants to ban the Burqa. The French anti-Jihad blog, GalliaWatch, thinks this is a bad idea:

As stated in my previous post, a Salon Beige reader attempted to send three comments on the topic of Islam to Le Figaro. All three were rejected. Each of the three comments is followed by a kind of refrain:

1. The burqa is not even worn in Iran. (Just look at today's news photos).

The women here wear it to provoke. They would be only too happy to have a parliamentary committee set up. Let us not give them a soap box. HALDE might rule in their favor.

However, I would like to know the real reason why André Gerin, of the Communist Party, and his colleagues, raised this question of the burqa. Rather than becoming angry at the result, they ought to have become angry at the cause: the immigration of peoples who, because of their numbers and their cultures, are not assimilable.

Note: A reminder that André Gérin, a Communist, was the initiator of the move to ban the burqa.

In the name of "laïcité" they have felled anything liable to resist the establishment of Islam in France. By denouncing the Christian roots of our civilization and rejecting the values that went with it they have opened the door to the Trojan Horse. There is no longer anything that can prevent them from achieving their ends. For Islam is a proselytizing religion that vomits on the yellow-bellied laïcité, because for Islam there is not and can never be separation from the State.

2. There is no intelligent and open-minded Islam able to adapt to European values (...)

In Islamic lands, a non-Muslim is a second-class citizen. Look at what is happening in so-called moderate countries: the Copts are bullied in Egypt, those who own Bibles are condemned in Algeria, in Turkey it is forbidden to build new churches. Elsewhere, there is condemnation of anything that displays a cross.

3. Only a committed "laïciste" (i.e., a person who espouses separation of Church and State) wins the approval of web moderators who block any comment pointing to a conquering Islam facing a West that has nothing to offer in opposition except a few parliamentary committees.

In the name of secular religion, France has abandoned all the values that could effectively resist this radical Islam. Tolerance is contrary to conviction: if I tolerate everything, how can I defend my own convictions? Islam by its nature proselytizes (as any religion ought to, otherwise what would be the reality of a faith if its adherents do not wish to share it?) and vomits on the yellow-bellied laïcité because for Islam there is not and can never be separation from the State.

Le Figaro censured the comments no doubt because they are critical of laïcité.

The reader informs us that Le Figaro is staunchly pro-laïcité, which in turn implies a total rejection of religion as a weapon against another religion, i.e., a total rejection of Christianity as a force employable by the French State to combat Islam. France cannot employ Christianity because France is not only spiritually de-Christianized, France is bound by laïcité. Laïcité cannot be a weapon against Islam because it is too weak, and Islam spits on it.

Why is laïcité so weak? As the reader says, there is the absence of a specific conviction. Second, laïcité by its nature, means Church/State separation, a notion completely rejected by Islam. The French State needed, at the outset, to acknowledge the incompatiblity of Islam with the law of 1905. Instead, it chose to circumvent the law by creating a bogus Islam tailored just for France - Sarkozy's pet project was the "Islam OF France." But in addition, the existing religious forces in France, i.e., Christianity and Judaism, that could be and should be creating obstacles to the growth of Islam, are instead welcoming it as a type of salvation. So the religious forces themselves have been emasculated, and are now incapable of distinguishing an enemy from a friend.

The profound irony is that by allowing in the Trojan Horse of Islam, France has destroyed her own laïcité, and is becoming, both openly and furtively, Islamic. But Le Figaro can't acknowledge this, any more than it acknowledges the old adage that you fight fire with fire, (or religion with religion).

Would the sight of thousands of burqas all over France change anything? It might. Which is why Sarkozy may pursue this idea of a parliamentary committee, and fight "heroically" for a ban on the burqa, and appear to the Western media as a "tough" defender of Western values.

Final observation: In 2004, after years of debate on headscarves, a law was finally passed banning them in the schools. Known as the law of March 15, 2004, it banned headscraves from public elementary and secondary schools, in the name of laïcité. Such a law was superfluous because the law of 1905 already banned all religious symbols from public places such as schools and government buildings. Furthermore, banning the scarves did nothing to stop Islamic immigration. It was an empty gesture, just as banning the burqa will be.

Final note: The French State (like any Western democracy in the same situation) could ban Islam on POLITICAL grounds, rather than religious ones, since Islam is a threat to the State, not just a threat to Christianity. Why this has not happened can be attributed to the false god of egalitarianism.

Is this a call to end the separation of church and state, and does this person really believe the only people who can mount a principled opposition to Islam are devout Christians and Jews? That only the religious have convictions? How do you say "condescending and presumptuous" in French?

He makes the accurate observation that the non-Islamic religions have "emasculated" themselves in their search for accommodation with Islam. Is his solution then to give these religious bodies the power of the state on the assumption that they would then rise up and use such power to protect the rights of all?

Tiberge, the writer, is a woman, actually.

I'm not sure what her proposed solution is.

However, I thought this was an interesting perspective. I'm pretty strong on the "separation of church and state" idea, but at the same time, I think it is important for our culture to acknowledge it's Judeo-Christian roots.

The reason this is important is,

2) because of the fact that our rights are believed to have come from God, they are BEFORE any other law set by a King, Legislature, Judge, Czar, State Dept. or anyone else.

The other day, Grant Jones posted a very fine essay by Edward Cline here at IBA. The essay made the statement that ONLY Objectivism can make a principled stand against the problems we face.

I find such a statement to be problematic to say the least, and possibly bordering on Totalitarianism.

I believe we ought to acknowledge that there are a plurality of sources from which we derive a somewhat shared belief in transcendent and absolute human rights.

And, RRA, I note you read that essay by Edward Cline, and you commented on it. However, you saw nothing wrong with his absolutist statement, did you? You did not question whether he wanted to institute Objectivist rule in America. And yet, honestly, it did sound a little bit like that, didn't it?

I think it would be nice if all our writers respected that, but it's ok that they don't. Especially since everyone here has such strength to share.