Islam Destroys the Africaness of Africa 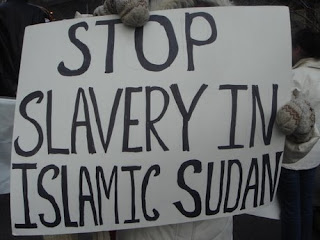 Here is a stinging indictment of the historical revisionism and outright denial surrounding the treatment of black Africans under Islamic regimes. "The trouble with Black Muslims," by Rudolf Okonkwo for the Examiner, June 28:

Even Obama cannot say it. But someone has to say it.

We cannot be talking about this season of hate without mentioning the steep decline into actionable hate by misguided black Muslims. 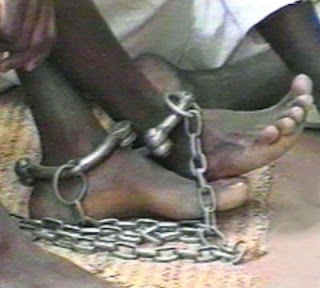 That was how we began a discussion about the world and the place of the black man in it.

“Why are you a Muslim?” I asked him at one point.
“Because my people were Muslims before the blue-eyed white devils bought us and brought us to America as slaves and forced us to be Christians and to worship a blue-eyed Christ.”
“O’ yeah.”
“Yes!”
“But I am from Africa and my grandfather was never a Muslim nor was he a Christian.”

He was shocked when I said that.

“It is OK if you want to be a Muslim and follow Elijah Muhammed and changed your name to Muhammed, too. But don’t tell me you are trying to be like your forefathers,” I said. [...]

Some of these people are carrying their misguided and misrepresented history and anger out in the open and are even planning to act on them. It concerns me. And it should concern you, too.

First of all, I came from a country where there are Muslims. Those who have Arabic features assume superior position over those who are black. In many instances, the black Muslims are totally disregarded, treated as inconsequential.

I have asked black Muslims mad at how white people treated black slaves to ask themselves were the millions of slaves the Arab world took from Africa were? They disappeared. They were used and disposed of. If not, the Arab world would be booming with its own share of black men and women.

I have asked black Muslims mad at the “war” between the West and Islam to look at the genocide in Darfur and find out how Muslims treat their black brothers and sisters.

In Africa, the homeland of all black people, Islam came from the Middle East and Christianity came from Europe and they all exerted inordinate damage. But where Islam touched, there is no recognition of the ways of life of the people. Islam, being a way of life, swallowed all that was African in the people.

All black people must think before they jump from frying pan to fire. And before you pick up arms to fight for those Talibans dying in Afghanistan, spare a minute for two million children who die of malaria each year in Sub-Saharan Africa. Those are your people. For real!

I never understood why some American Blacks identify themselves with Muslims. Not to mention, they often have some misconception that Muslims are oppressed when, in fact, they are possibly the greatest oppressors in the history of humanity. Guys like the one mentioned in the conversation are simply uneducated. If they took 5 minutes to hit the history books, they would see that it was Arab Muslims who started the enslavement of Blacks, initiated the slave trade, and even continue it to this day in some remote regions of Africa. Nation of Islam members are ALL useful idiots.

Total,
They are uneducated. But, to a large extent, sadly, they are willfully uneducated.

I have attempted to explain to black friends of mine about how Islam is enslaving blacks in the Sudan on this very day. They look at me like I'm crazy, like all of the sudden I'm the white devil, spreading lies.

they just won't believe it.

That's willful ignorance. It is not simply ignorance.

And, by the way, you ought to hear the justifications I've heard for why they think Farrakhan is good for the black community even though he's a virtual Nazi.

I'm a little bitter on this subject, as you might imagine. It makes me extremely unhappy to know that friends of mine would treat me as the white devil the minute I broach what to them is a political topic.

The enslavement of black people is not a political issue. It is a fact, and it is a moral issue.

And, I'm the white devil.