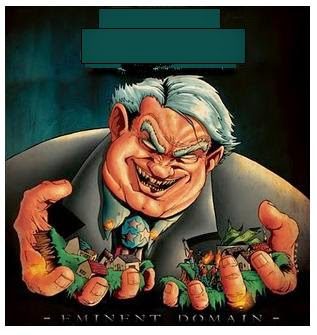 Most readers of this blog have likely heard about the Cattle Battle at the Bundy Ranch. Technically, this confrontation did not involve eminent domain but rather the Bureau of Land Management and grazing rights on public lands.

Now something similar is afoot in Texas.  Before continuing to read this blog post, please go to THIS LINK to read the article and to watch the video about another possible impending land grab on the part of the Bureau Land Management.

The BLM aside, the matter of eminent domain (objected to by our Founders Thomas Jefferson and James Madison), particularly as redefined by the Kelo v. City of New London decision of 2005, should be of concern to all Americans — no matter where they live.

Prior to the Kelo decision, privately-owned land was typically not confiscated by the government and transferred to another private owner. Rather, the power of seizing private property via the power of eminent domain was restricted to certain public-use situations so as to prevent the abuse of government power:


...Jim Saleet worked in the pharmaceutical industry, paid off his house and then retired. Now, he and his wife plan to spend the rest of their days there [in Lakewood, Ohio], and pass their house on to their children.

But Lakewood's mayor, Madeleine Cain, has other plans. She wants to tear down the Saleets' home, plus 55 homes around it, along with four apartment buildings and more than a dozen businesses.

Why? So that private developers can build high-priced condos, and a high-end shopping mall, and thus raise Lakewood's property tax base.

The mayor told 60 Minutes that she sought out a developer for the project because Lakewood's aging tax base has been shrinking and the city simply needs more money.

"This is about Lakewood's future. Lakewood cannot survive without a strengthened tax base. Is it right to consider this a public good? Absolutely," says the mayor, who admits that it's difficult and unfortunate that the Saleets are being asked to give up their home....


The case arose in the context of condemnation by the city of New London, Connecticut, of privately owned real property, so that it could be used as part of a “comprehensive redevelopment plan.” However, the private developer was unable to obtain financing and abandoned the redevelopment project, leaving the land as an empty lot, which was eventually turned into a temporary dump.

In Philadelphia, there has been another recent case involving the overreach of eminent domain in Philadelphia.

This should now be running through your head:


First they came for the Socialists, and I did not speak out-- Because I was not a Socialist.

Then they came for the Jews, and I did not speak out-- Because I was not a Jew.

Then they came for me--and there was no one left to speak for me.

More about the BLM land grab: The acreage the federal Bureau of Land Management currently owns in the state of Nevada is more than all the land in all of the states of New England combined, according to data published by the Congressional Research Service.

By contrast, the BLM does not own a single acre of land in any New England state....

It is BAD ENOUGH when the govt seizes pvt land for an interstate, or such, but there are literally NO CIRCUMSTANCES I can imagine in which it would be permissible or constitutional for the govt to take from one and give to another.

NONE.
The issue of the sanctity of property is NOT one of the occasional and temporary or fleeting impression of the public good, or the benefit by way of taxes of a local govt for some SHORT period of time.

KELO is most informative since the land the govt seized and then xferred to others was never even used since the entire reason for this was commercial, and the final builder no longer saw any sense in continuing his project for COMMERCIAL REASONS.
The govt in question receives taxes on the land (which, were paid before, anyway). No jobs were created.

Property=freedom. They are indivisible. It took me many years to realize how right Adams was.


"The moment the idea is admitted into society that property is not as sacred as the laws of God, and that there is not a force of law and public justice to protect it, anarchy and tyranny commence."

Why are WE THE PEOPLE allowing our government to steal our property, which is, as you pointed out, our freedom?

AoW - On Fox&Friends this morning, it was revealed that the BLM is denied these publicised land seizures aren't a land grab. Rather they claim rights dating back to the Louisiana Purchase...which the BLM claims trumps current ownership proved with actual deeds & tax records going back generations.

The gov't has to come up with ways to keep their whole rotten
welfare wealth-transfer system afloat to maintain the fiction of a "successful" multicultural country. Gov't jobs and bloated public sector union jobs that taxpayers underwrite (that provide otherwise unemployable blacks and browns with well-paid jobs)have massive unmet liabilities, and city, county, state, federal gov'ts are scrambling to keep the hogs fed at the trough. Except it's not enough. This ridiculous drifting Titanic s headed for an iceberg.
I suggest you find people that got your back.

Bundy's full remarks, edited out of the Jew York Times reporting,
of course.
"We've progressed quite a bit from that day until now, and we sure don't want to go back. We sure don't want the colored people to go back to that point. We sure don't want these Mexican people to go back to that point. And we can make a difference right now by taking care of some of these bureaucracies, and do it in a peaceful way."
Of course, the posters here wet their panties because they believed everything they read. "Oh, he said NEGRO and talked about picking cotton!!" Anti-white DWL crybabies.

AoW, Preview is my friend...Breitbart has a thread covering the same details I mentioned in a comment needing serious edits above.
http://www.breitbart.com/Breitbart-Texas/2014/04/25/Bureau-Land-Management-on-Red-River-Not-a-Land-Grab-Its-Already-Ours

Where can I find Bundy's full remarks?

From the Breitbart link:

“It’s not the BLM making any such claim as to the status of the land,” McGuire said. “That land was a matter that the courts adjudicated decades ago, going back to the 1920s in fact. The Supreme Court settled the matter as to where the public land in the Red River was. So, BLM is really just proceeding on those earlier court decisions.”

Think of the families that could lose their homes -- homes that they have worked to establish and to keep and to pass along to their children.