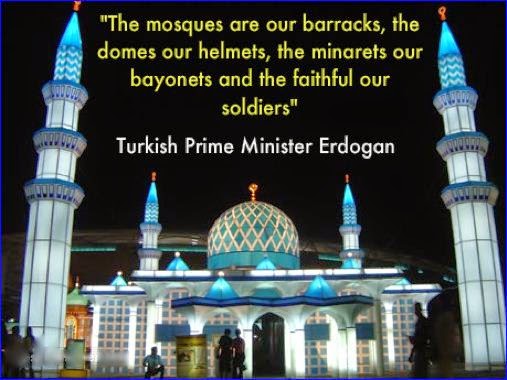 What is surprising is that so many Western politicians, including EU-minded ones, apparently still ignore what the consequences could be of such an ideology. Do they really assume it could never happen to them?

Once again, Turkey’s Prime Minister, Recep Tayyip Erdogan, is – although ineffectively – cracking down on social media, most notably Twitter, which public outrage forced him to reinstate, and the latest municipal elections were again ridden with intimidation and fraud.

On September 12, 1980, the Turkish military cracked down on religious opposition movements that challenged the secular state, and took power over the country. What stood out during these events was that Western nations, with political structures vigorously opposed to military involvement in civil politics, were actually relieved by the military’s action[1]. After all, one year earlier the secular and allied state of Iran had transformed into a theocratic and hostile nation.

Over time, however, a worrying dynamic revealed itself: The Western view of Islamic religious political movements changed, while the core ideology and intentions of these movements did not. This phenomenon coincided with the “New Left” consolidating its “March through the institutions,” referring to its takeover of the academy and journalism.[2]

The West stopped seeing political Islam as an expansionist, possibly antagonistic, ideology, and started actively to aid the consolidation of Islamist power, particularly in Turkey.

The EU stated that if Turkey were ever going to join it, the country would have to abolish the influence the Turkish military had over civil politics. It is reasonable that the EU did not want a member state with a military that could undo a democracy at will.

But it was unreasonable of the EU to think that the only way a democracy could be undone was by a military, or, in the instance of Turkey, that of the then-secular Turkish military. The EU may also have been naïve to dismiss out of hand the claims of the Turkish military that Islamist doctrine was inherently anti-Western.

On video[6], Erdogan was saying: "You cannot be both secular and a Muslim. You will either be a Muslim, or secular. When both are together, they create reverse magnetism [they repel one another]. For them to exist together is not a possibility. Therefore, it is not possible for a person who says, 'I am a Muslim' to go on and say, 'I am secular, too.' And why is that? Because Allah, the creator of the Muslim, has absolute power and rule.... When [does the sovereignty belong to the people]? It is only when they go to the polls [every five years] that sovereignty belongs to the people. But both materially, and in essence, sovereignty unconditionally and always belongs to Allah."Hmmm.......Democracy Stipulates that Man Is Above Allah – Which Is Blatant Heresy.Read the full story here.
Posted by Pastorius at 3:26:00 pm