Yet Another Triumph For Allah The Great and Powerful

Yes, that's right; Muslims have captured a baby. And they're not gonna let it get away!

Fuck Allah and his pedophile prophet: 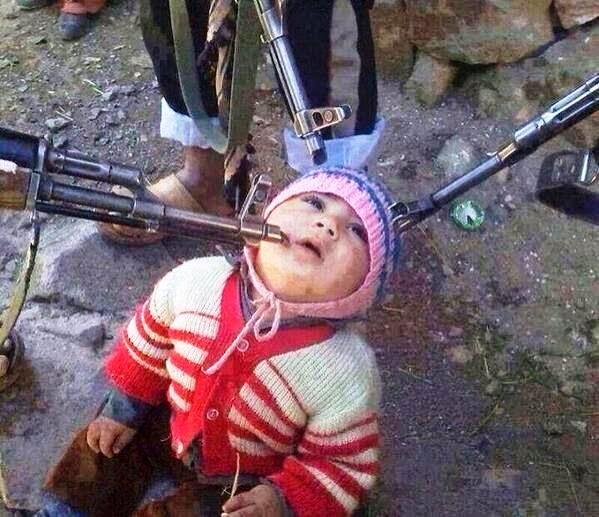 According to Sham Times and other Arabic websites, jihadi social media networks posted the above picture of a child sitting on the ground while surrounded by armed men pointing their rifles at him.  The caption appearing with the picture, purportedly posted by a supporter of the Free Syrian Army, is “Our youngest hostage from among the hostile sects of Kessab.”
Kessab is a predominantly Christian Armenian village in Syria near the Turkish border.  Earlier it was invaded by jihadis, who terrorized, pillaged churches, and prompted some 2000 residents to flee.  Initial reports had stated that about a dozen families remained as hostages.
Since the picture appeared on Arabic social media, many have expressed shock and outrage, condemning the Syrian “rebels,” while others cast doubt on the authenticity of the picture.
Of course, those wondering what the jihadis have to gain from taking such a picture and making it public would do well to remember that these are the same “rebels” who decapitate people and wave their severed and bloodied heads in front of cameras while smiling; these are the same “freedom fighters” who literally eat their victims on camera.
Surely “teasing” an infidel toddler – a subhuman – with their rifles and sharing it with their sadistic comrades via the Internet for a “laugh” should not be too surprising?
At any rate, the fact remains: the “Free Syrian Army,” along with other “rebel” groups operating in Syria, are guilty of countless barbaric crimes against humanity — including against women and children.
Posted by Pastorius at 8:49:00 pm

Fuck these bastards! The US needs to stop pussy footing around and evacuate the innocent women and children and just bomb the shit out of the middle east untill there is nothing left of these stupid extremists.