The Nikolayev Synagogue in Ukraine was reportedly firebombed by vandals at approximate 2 AM on Saturday morning, according to Chabad blog Shturem and closed-circuit footage of the attack, uploaded to YouTube at the weekend.

The footage was posted by Yisroel Gotlieb, son of the city’s chief rabbi, Sholom Gotlieb.

One firebomb was thrown at the door of the synagogue, which was unoccupied at the time, and another was lobbed at a window, according to the blog.

The junior Gotleib told Shturem that “miraculously a person passing by the shul was equipped with a fire extinguisher, and immediately put out the fire that had erupted, preventing massive damage.”Read the full story here.


Hmmm.....Ukraine PM vows to find 'bastards' behind anti-Semitic fliers. He shouldn't have to look far : here's Oleh Tyahnybok, who has claimed a “Moscow-Jewish mafia” rule Ukraine. 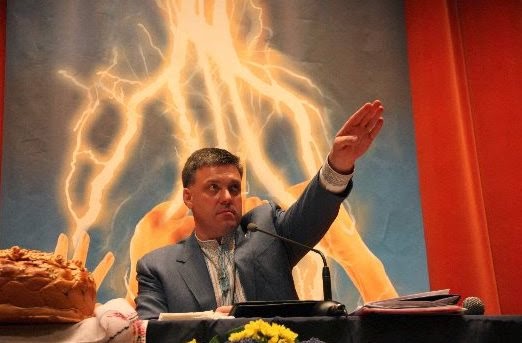