A Holocaust survivor warned all the Jews of UKR to get the hell out. I have said many times since this **’juden to register’** story broke out that only a SCHLEMIEL would hang around. 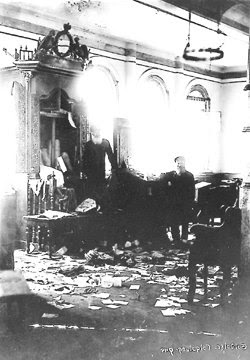 A Synagogue in Demievka, Ukraine 1919
After all, even if this was a purely made up provocation, what makes it so believable? 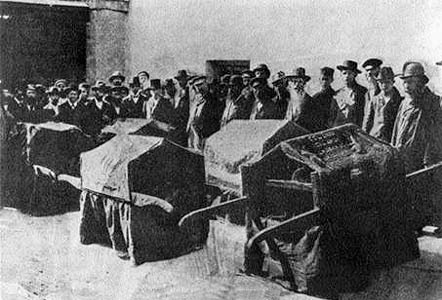 Kishinev, Bessarabia 1903
Xerxes adviser, a long descended king of the Amalakites, was the first, on the eve of Xerxes invasion of Greece, to try to kill the jews (that we know of). Cicero, DECADES prior to the revolt from Rome which saw the Romans drive out ALL the jews from Israel gave a famous speech denouncing the Jews. And after the council of Nicaea it was all downhill for the ‘Christ killing’ stiff necked Jews. Jews murdered by the Ataman Cossacks, Ukraine
I have in other places published a 20+ page timeline of antisemitism (a history of historical acts and facts on which the Holocaust IS ONE LINE).
I was born in 1949. Growing up in the Bronx in a neighborhood which was about one third each white, black, and Puerto Rican, during marches, and sit ins, I had no doubt that whatever had powered what had occurred in Germany, the lesson in human values about racism, which all looked the same to me, was LEARNED. The purveyors of antisemitism were the American Nazi Party, the KKK, and their idiot solo followers. VESTIGIAL ACTORS. I learned that we are NOT all identical, but we make a team. If we choose.
On 9/13/2001 I ‘walked’ into an Islamic forum, and never really left, and suddenly the truth was obvious. Imams, Mullahs, Quran provided reference to the Protocols, fake Talmud quotes, lies about history, until I was defending the idea that the sky was blue. (A role easily relished, actually).
Mein Kampf still was a best seller. But that was not all…since, in Africa, Egypt, Turkey (Valley of the Wolves), Russia, wherever there was a history, and things got tough, BINGO. Whether it was Zhirinovsky, Stormfront, stories from govt papers in the ME that Jews really DID use the blood of Christians in Matzah, various European ‘political nationalist’ parties, Iran, and finally HERE with the now disgusting and so far small paleoconservative AND LEFTIST insinuations that Americans who happen to be Jews (may..a good word for perpetual suspicion) have dual loyalties and are not to be (fully) trusted especially if (as the left feels) the real problem in the Middle East is ISRAEL. Jews murdered in the Ukraine
It is a long 2500 years of repression, suspicion, pogroms, accusation of bringing plagues, official ghettos, jizya, expulsions, slaughters, it becomes obvious that the Holocaust was MERELY the intersection of this history with the first applicable state capable of industrial murder.
So, when the real or fake paper arrives outside the doors of the temple to be distributed by masked men?
Find an agent to act for sale of your possession, get all the cash you can quickly get and LEAVE, and get to the ONLY sanctuary on this planet you can be certain of.
The people who scoff at that idea?
All history says they are the ashes going up a chimney, or those rounded up and simply never heard from again…. after being good little girls and boys and REGISTERING.
LEAVE NOW
Posted by Epaminondas at 12:28:00 pm

Evil has a way of persisting.

It is sad to read something like this on Easter. This and before there were calls by an Orthodox priest in Ukraine to kick the Jews out.

Sometimes the attitude of "Christians" disgusts me. I expect shit like this from Muslims, so they don't surprise me one bit but Christians are named after the title of Jesus. Wonder how many even know what He said in Matthew 25:30-45.

Like I said before, those who decide to remain in Ukraine, I hope to God they're armed to the teeth. And I hope that this time they shoot first and ask questions later.

The worst part of all of this is that NEVER AGAIN sounds just as meaningless as ISLAM MEANS PEACE.

He does, Nico. What made you think otherwise?