Princeton and Northwestern : US is NOW an Oligarchy (POLITICAL CLASS)

America is no longer a democracy — never mind the democratic republic envisioned by Founding Fathers.
Rather, it has taken a turn down elitist lane and become

— an oligarchy, said a new study jointly conducted by Princeton and Northwestern universities.
One finding in the study: The U.S. government now represents the rich and powerful, not the average citizen, United Press International reported.

In the study, “Testing Theories of American Politics: Elites, Interest Groups and Average Citizens,” researchers compared 1,800 different U.S. policies that were put in place by politicians between 1981 and 2002 to the type of policies preferred by the average and wealthy American, or special interest groups.

Researchers then concluded that U.S. policies are formed more by special interest groups than by politicians properly representing the will of the general people, including the lower-income class.

The central point that emerges from our research is that economic elites and organized groups representing business interests have substantial independent impacts on U.S. government policy, while mass-based interest groups and average citizens have little or no independent influence,” 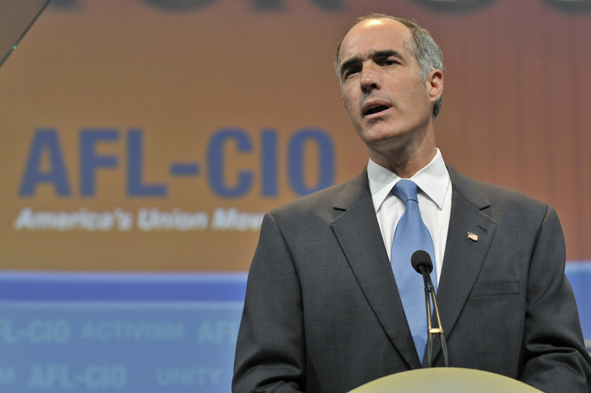 The study also found: “When a majority of citizens disagrees with economic elites and/or with organized interests, they generally lose.”

Recent polling has shown huge gaps between the Political Class and Mainstream Americans on issues ranging from immigration to health care to the virtues of free markets.
The gap is just as big when it comes to the traditional right direction/wrong track polling question.
A Rasmussen Reports national telephone survey shows that 67% of Political Class voters believe the United States is generally heading in the right direction. However, things look a lot different to Mainstream Americans. Among these voters, 84% say the country has gotten off on the wrong track.
Twenty-four percent (24%) of Mainstream voters consider fiscal policy issues such as taxes and government spending to be the most important issue facing the nation today. Just two percent (2%) of Political Class voters agree.
With a gap that wide, it’s not surprising that 68% of voters believe the Political Class doesn’t care what most Americans think.  Fifty-nine percent (59%) are embarrassed by the behavior of the Political Class.
Just 23% believe the federal government today has the consent of the governed.
Most voters believe that cutting government spending and reducing deficits is good for the economy. The only group that disagrees is America’s Political Class. In addition to the policy implications, this highlights an interesting dilemma when it comes to interpreting polling data based upon questions that make sense only to the Political Class. After all, if someone believes spending cuts are good for the economy, how can they answer a question giving them a choice between spending cuts and helping the economy?

Mainstream Americans tend to trust the wisdom of the crowd more than their political leaders and are skeptical of both big government and big business (see crosstabs). While Republicans and unaffiliated voters are more likely to hold Mainstream views than Democrats, a majority of those in the president’s party (51%) hold such views.
Only four percent (4%) now support the Political Class. These voters tend to trust political leaders more than the public at large and are far less skeptical about government.
When leaners are included, 81% are in the Mainstream category, and 12% support the Political Class.
(Want a free daily e-mail update ? If it’s in the news, it’s in our polls). Rasmussen Reports updates are also available on Twitter or Facebook.
Polling conducted from January 18 through January 24 found that 76% of voters generally trust the American people more than political leaders on important national issues. Seventy-one percent (71%) view the federal government as a special interest group, and 70% believe that the government and big business typically work together in ways that hurt consumers and investors. On each question, a majority of Republicans, Democrats and unaffiliated voters share those views.
These results help explain why most voters are angry at the policies of the federal government,and most think that neither political party understands what the country needs.
“The American people don’t want to be governed from the left, the right or the center. The American people want to govern themselves,” says Scott Rasmussen, president of Rasmussen Reports. “The American attachment to self-governance runs deep. It is one of our nation’s cherished core values and an important part of our cultural DNA.”

What are we going to do to take our country back?

“The American people don’t want to be governed from the left, the right or the center. The American people want to govern themselves,” says Scott Rasmussen, president of Rasmussen Reports. “The American attachment to self-governance runs deep. It is one of our nation’s cherished core values and an important part of our cultural DNA.”

When Juan Peron became president of Argentina in 1946 Borges wrote:

Peron, like Obama, brought "hope and change" to Argentina that turned Argentina from a first world, developed country to what it is right now.

It all sounds awfully similar, even down to the commentary about the populace of each country. Hope Americans can stick to and value their individualism or self-governance better than Argentines did.