Pentagon Pleads With Obama Regime To Stop New Russian Spy Plane From Flying In American Airspace, John Kerry and His Parade of Pathetic Pussies Want To Approve It 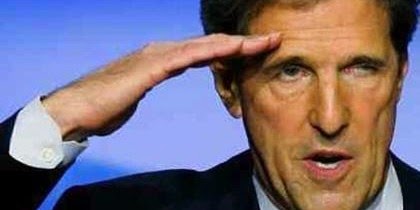 From the Daily Beast:


The Joint Chiefs of Staff of the U.S. military and American intelligence agencies have quietly pushed the White House in recent weeks to deny a new Russian surveillance plane the right to fly over U.S. territory.

This week, the White House finally began consideration of the decision whether to certify the new Russian aircraft under the so-called “Open Skies Treaty.” And now the question becomes: Will the spies and generals get their way?

As the United States and Russia face off publicly over Ukraine, behind the scenes, President Obama’s national security cabinet is having its own quiet feud over a long-standing agreement to allow Russian surveillance flights over U.S. airspace. The spies and the generals want to deny the Russians the overflight rights for its latest surveillance planes.

The State Department, which ultimately makes that decision, has favored such certification. On Wednesday an interagency meeting of senior officials failed to reach consensus, delaying the decision until Obama takes it up with the National Security Council, according to U.S. officials involved in the dispute.

At issue is the Open Skies Treaty. First signed in 1992 and finally ratified in 2002, the treaty adopted by 34 nations allows the safe passage of planes equipped with advanced cameras and sensors that give governments the imagery and data they use to assess everything from compliance with arms control treaties to troop movements.

In their letter, the two lawmakers write, “We agree with the concerns expressed by the Intelligence Community and the military leadership of the Department of Defense” in their opposition to certifying the new Russian planes under the treaty.

The State Department on the other hand has argued the United States should live up to the treaty’s obligations and approve the new Russian aircraft.

The decision to certify the planes and their sensors has been pending since late last year, long before the Ukraine crisis began. One senior U.S. official said, “This isn’t just an issue between the United States and Russia. Our allies and partners depend on this treaty for insight into Russia because they don’t have the same capabilities as the United States.”

The State Department on the other hand has argued the United States should live up to the treaty’s obligations and approve the new Russian aircraft.

Yes because not acting like dumb fuck idiots would be too 19th century for these assholes. You know since use of brains was just like ancient history or something MAN! Double RAINBOW and shit!