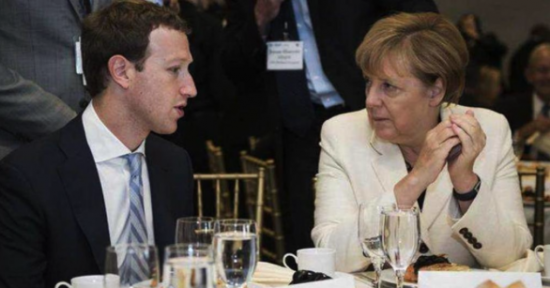 Fuck Mark Zuckerberg! And fuck Angela Merkel. Give me Liberty or give me death.


German Chancellor Angela Merkel was overheard confronting Facebook CEO Mark Zuckerberg over incendiary posts on the social network, Bloomberg reported on Sunday, amid complaints from her government about anti-immigrant posts in the midst of Europe’s refugee crisis.

On the sidelines of a United Nations luncheon on Saturday, Merkel was caught on a hot mic pressing Zuckerberg about social media posts about the wave of Syrian refugees entering Germany, the publication reported.

The Facebook CEO was overheard responding that “we need to do some work” on curtailing anti-immigrant posts about the refugee crisis.

“Are you working on this?” Merkel asked in English, to which Zuckerberg replied in the affirmative before the transmission was disrupted.

"Give me liberty or give me death"...don't give them any ideas...
http://www.govexec.com/federal-news/fedblog/2015/09/refugees-find-accommodation-armys-former-heidelberg-home/120275/

Military personnel who formerly served in Heidelberg, Germany, might
not recognize their old stomping grounds today. In response to Europe's
deepening refugee crisis, the Germans have turned Patrick Henry
Village—formerly a housing area for Army families—into a shelter for
those fleeing chaos in the Middle East and North Africa.

Patrick Henry Village was a special place for many who lived there, prompting former residents to create at least one website and an unofficial Facebook page to share memories of military childhood in one of the most picturesque areas of Germany. The installation opened in 1947 following World War II; the Army returned it to Germany in 2013. At its peak, 16,000 Americans lived there.

The Germans just can't get away from Fascism can they. Must be in the genes.

'These people expressing themselves are an annoyance, so if you like business in Teutoland, please use your head. And BTW, what kind of name is ZUCKERBERG, anyway, Mein Herr?"

Zuckerberg is an idiot with too much money looking for a cause to get behind to impress the world.

Merkel is a brainless zombie, at least in this case. But lets not forget that she has listened to Christian leaders in Germany on this matter a lot. They are the ones that want all these vermin to move to Europe because too few Europeans go to church and they're always looking to get more folks to convert.

Sad thing about "missionaries" and "pastors" is that they have just given up on their own populations and think "little brown people" are an easier target.

They're in for a HUGE SURPRISE.

Epa and Nico both sum it up well.

The reason I am so angry with Zuckerberg in this case is, well, for one, he's been a supporter of Clockmed the little Lying Jihadist or bullshit cute technology and also because Zuckerberg is an American and he should know better than to allow people to push him around on Free Speech.

If these young entrepreneurs want to use their companies to create a better world, (as in Nico's point that Zuckerberg is an idiot looking for a cause) they couldn't pick a better cause than Free Speech.