Army Makes History by Putting Muslim in Charge of 14,000 US Soldiers’ Spiritual Needs 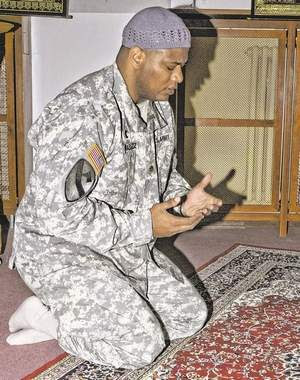 Can you imagine you're a Bible-believing Christian man, and you sign up to put your life on the line for your nation, and this guy is your Chaplain?!!?!!?

Army Makes History by Putting Muslim in Charge of 14,000 US Soldiers’ Spiritual Needs


In January, Lt. Col. Khallid Shabazz received the call every Army chaplain dreams of, the call that validates years of intense study and hard work toward keeping the U.S. military in good spiritual health.

He was offered the job of chaplain for an entire division, an honor for anyone in his field but a milestone in his case. After a ceremony this summer, Shabazz will become the first Muslim division-level chaplain in the history of the U.S. military – a Muslim spiritual leader for more than 14,000 mostly Christian soldiers.[snip]

Shabazz said. “I have a real opportunity to be an ambassador for the Army and for my religion.”

The decision was made in January. The article doesn't give an exact day, but guess who was still president then? Probably one of Obama's little land mines he left behind for Trump.
Posted by Pastorius at 9:54:00 pm

I believe you have the right to a Chaplain of your own faith. When I was in the Navy we always had a protestant chaplain and usually a Catholic chaplain on board for active duty training.

That would seem reasonable to me.

All indications, including the pope's actions and words, point to a one world religion. This may well be just one more step closer to that goal.

Other possibility is the dreadful ignorance prevailing in this country on what Islam represents. It would be interesting who made the appointment.

It happened in the last days of the Obama Administration. I think it is likely it was at Obama's direction.