Newsweek just published this laughable piece arguing that the USA needs the Muslim Ms. Marvel as a "hero", claiming she's "best equipped" for the job:


During the first few weeks of the Trump administration, we’ve seen increased pressure on Muslim and immigrant communities in the United States.

In the face of these threats, which Marvel superhero might be best equipped to defend the people, ideals and institutions under attack? Some comic fans and critics are pointing to Kamala Khan, the new Ms. Marvel.

Some very left-wing "fans/critics" are pointing to a character created more as a political statement than a true entertainment vehicle, and when the moonbats who came up with the idea to characterize her as such whitewash the entire Religion of Peace, and call all dissenters liars, is it any wonder the book doesn't hold up?


Khan, the brainchild of comic writer G. Willow Wilson and editor Sana Amanat, is a revamp of the classic Ms. Marvel character (originally named Carol Danvers and created in 1968). First introduced in early 2014, Khan is a Muslim, Pakistani-American teenager who fights crime in Jersey City and occasionally teams up with the Avengers.

Since Donald Trump’s inauguration, fans have created images of Khan tearing up a photo of the president, punching him (evoking a famous 1941 cover of Captain America punching Hitler) and grieving in her room. But the new Ms. Marvel’s significance extends beyond symbolism.

Wow...what kind of "fans" are these exactly? They're actually hurting the character they supposedly root for more than helping. It's not just Trump they're being "tolerant" of. Some way to respect at least half the nation too.


In Kamala Khan, Wilson and Amanat have created a superhero whose patriotism and contributions to Jersey City emerge because of her Muslim heritage, not despite it. She challenges the assumptions many Americans have about Muslims and is a radical departure from how the media tend to depict Muslim-Americans. She shows how Muslim-Americans and immigrants are not forces that threaten communities – as some would argue – but are people who can strengthen and preserve them.

Reading this part made me fall to the floor laughing. By their definition, even Daily KOS and the New York Times, some of the most Islamophilic news sources around, would be depicting Islamists in a negative light. This comes from the European division of Newsweek, but even so, I doubt the writer of this silly propaganda believes a word she's saying. And if she won't quote or acknowledge a single verse in the Koran/Hadith, then I just don't see what her point is. Then, as if more proof were needed the series is already politicized, it's noted that:


...Khan cites her family’s safety and her desire to lead a normal life, while also fearing that “the NSA will wiretap our mosque or something.”

What that's de-facto saying is, it's wrong to keep surveillance on any mosque in real life. And if the character's safety matters, what about that of many other US residents?


The comics paint an accurate portrait of Jersey City. Her brother Aamir is a committed Salafi (a conservative and sometimes controversial branch of Sunni Islam) and member of his university’s Muslim Student Association. Her best friend and occasional love interest, Bruno, works at a corner store and comes from Italian roots. The city’s diversity helps Kamala as she learns to be a more effective superhero. But it also rescues her from being a stand-in for all Muslim-American or Jersey City experiences.

An accurate portrayal? No doubt. They certainly don't paint a respectable one, if they even go so far as to attack Bernie Sanders, confirming the writers don't even like their fellow Democrats. And they're whitewashing Salafism, predictably. Just how is Salafism only sometimes controversial?


As one of 3.3 million Muslim-Americans, Khan flips the script on what Moustafa Bayoumi, author of “This Muslim American Life,” calls a “war on terror culture” that sees Muslim-Americans “not as complex human being[s] but only as purveyor[s] of possible future violence.”

Bayoumi’s book echoes other studies that detail the heightened suspicion and racial profiling Muslim-Americans have faced since 9/11, whether it’s in the workplace or interactions with the police. Each time there’s been a high-profile terrorist attack, these experiences, coupled with hate crimes and speech, intensify. Political rhetoric – like Donald Trump’s proposal to have a Muslim registry or his lie that thousands of Muslims cheered from Jersey City rooftops after the Twin Towers fell – only fans the flames.

It's getting pretty obvious at this point this is more an attack on Trump than a sincere argument. What they're doing here is little more than confusing race and religion/ideology. And look how she refuses to acknowledge Trump did have evidence to back up his accusations there were Muslims celebrating: some NJ police witnessed local Islamists doing so, and here's more information that tells even Dan Rather found proof there were Islamists out there who celebrated the acts of evil on 9-11. The writer goes on to give a description of one of the stories in the Marvel series:


...in one of Ms. Marvel’s most powerful narrative arcs, a planet attacks New York, leading to destruction eerily reminiscent of 9/11. Kamala works to protect Jersey City while realizing that her world has changed – and will change – irrevocably.

Gee, a whole planet? And it's probably not even Ego, the living planet seen in the Fantastic Four back in the early 1980s. But what if is a metaphor for right-wingers, and built on Trutherism? If so, it'll only further compound any concerns the book is more a political rant than anything else.


Kamala Khan is precisely the hero America needs today, but not because of a bat sign in the sky or any single definitive image. She is, above all, committed to the idea that every member of her faith, her generation, and her city has value and that their lives should be respected and protected. She demonstrates that the most heroic action is to face even the most despair-inducing challenges of the world head on while standing up for – and empowering – every vulnerable neighbor, classmate or stranger. She shows us how diverse representation can transform into action and organization that connect whole communities “by something you can’t break.”

Except they did break it. They broke the entertainment value of Marvel, and turned it all into a political rant, much like this article. Say, if they really think a character who adheres to Islam is the "hero" America needs today, how come they don't think the same about say, Joe Mannix, who's Armenian? Or if a Canadian resident counts, how about Alpha Flight's Sasquatch/Walter Langkowski, who's got Polish ancestry? This whole article is nothing more than a selfish bit of twaddle by somebody who's simply not being altruistic, and doesn't consider that comics like these are among the reasons why Trump got elected.

EPA HAS A SUGGESTION FOR A MUSLIMA HEROINE: 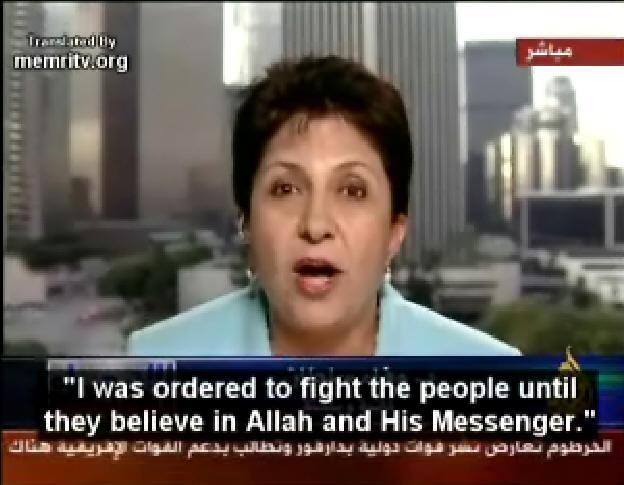