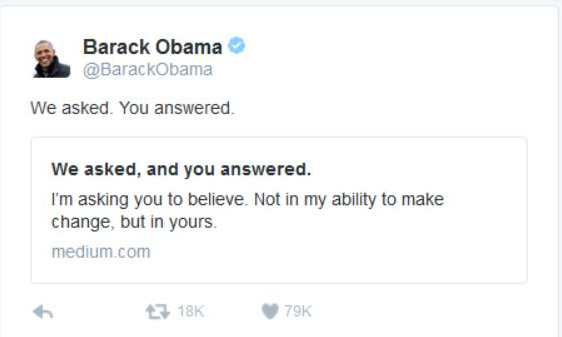 QUESTION: Do you think the leaks are a soft coup?
HF
ANSWER: The Obama administration intentionally set the stage knowing what they were doing was designed to undermine and cripple the Trump Administration. The sanctions on Putin were also intended to prevent Trump from reversing the tension created by Obama to create an international conflict. These leaks appear to be part of an intentional plot by Obama/Left to allow his supporters within the intelligence community to topple Trump if they can. Obama waited until he had just 17 days left in office to sign an executive order to expand the power of the National Security Agency (NSA) allowing it to share globally intercepted personal communications with the government’s 16 other intelligence agencies BEFORE any application of top secret or privacy protection would be attached. Obama never did this while he was in office. Whenever a politician does something like this, there is ALWAYS a hidden agenda. This Obama executive order changed everything with regard to national security that was put in place by an executive order dating back to Ronald Reagan. Obama opened the flood gates and this I personally believe was a treasonous act showing the Democrats adopted a strategy to undermine Trump from the outset and to create massive civil unrest.
Trump MUST reinstate the national security procedures that have been in place since Ronald Reagan and fire everyone in intelligence appointed by Obama. Clean the swamp must start right there and NOW! Obama knew he would set up a shadow government and refuse to leave Washington. He seems to be working harder now while as President he may have played golf more than any other president.
Proof that Obama is behind the civil unrest is the fact he has taken to Twitter. He states boldly to believe in that the people can bring about change through their own action. He is implying to rise up and create civil unrest on a massive scale. Tony Blair is taking the very same coordinated left-wing tactic in Britain.
Obama has been behind this entire affair of creating civil unrest but he is not the mastermind so-to-speak. I believe this left-wing group is deliberately undermining national security with their moles strategically placed within the intelligence community to undermine the government. That is unquestionable TREASON and the press will only attack Trump and never defend the country. When Obama won, you did not see the other 46% set fires and try to bring down the government. The left always demands it is their way or no way. This is why we will move into civil war in the years ahead. Independents just say live and let live – don’t bother me and I will not bother you. Leftists say you can live only as they command – they cannot sleep at night worrying what independents are doing. It’s like the Hunger Games – suppress all freedom is their agenda.
Posted by Pastorius at 4:45:00 pm

he has his alinsky web site and he stayed in Wash DC-I am not surprised- and I hope no on here is!!
C-CS

Newsbud presents major new revelations by former FBI whistleblower Sibel Edmonds. Edmonds, known as the most classified and gagged person in US history, takes on the US Congress and the culprit media in one of the most significant and longest ongoing political/criminal cover-ups involving the FBI, a notorious political mob in Chicago, a well-known elected official and her convicted criminal spouse. Further, she renews her public call for joint testimony under oath before the US Congress. Do not miss this in-depth exposé shedding light on just how notoriously corrupt criminals are given immunity and untouchable status, not only by the US government, but also by the Deep-State collaborators- the US media.
****
Sibel reveals Robert Creamer, the husband of Democrat congresswoman Jan Schakowsky, the same fella:

O’Keefe Video Sting Exposes ‘Bird-Dogging’ — Democrats’ Effort to Incite Violence at Trump Rallies "O’Keefe’s extensive video investigation reveals that the Hillary Clinton campaign and the Democratic National Committee (DNC) are involved in “bird-dogging” and other provocative tactics through a web of consultants led by Robert Creamer, a veteran Chicago activist and convicted felon who is thought to have planned Democrats’ political strategy during the push for Obamacare in 2009 and 2010.
(continued)

Sibel's expose about Dennis Hastert ten years before his pedophilia became mainstream news - she pondered how many depredations against young boys between the ages of 14-15, some foreign (think Pizzagate), could have been averted!

Sibel long ago also exposed Graham E. Fuller (RAND)mid level CIA ...yet it took 6-7 years for Fuller's identity to become household name once this CIA operative was connected to the Boston Marathon bombing. Fuller is connected to the uncle of the Tzarnaev brothers. The same uncle of Tzarnaev brothers who was prominently in front of media cameras speaking on behalf of the Tzarnaev family coincidentally was living on Fuller's property rent free.

Another prominent identity, Fetullah Gullen is now a household name despite Sibel exposing him to authorities and the press several years ago. That same CIA operative,Graham Fuller, sponsored Fetullah Gulen and was grooming him during the early 1990's.