Jorge Ramos: U.S. Is 'Our Country, Not Theirs' 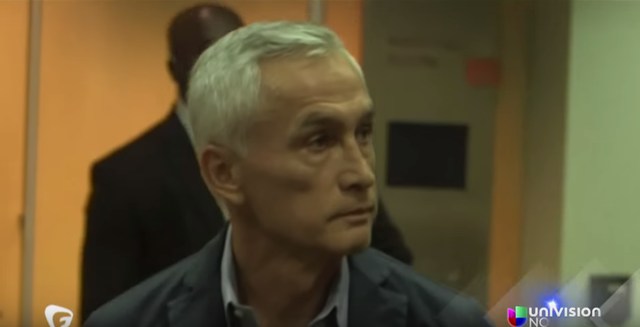 
Further ramping up his open opposition to President Trump's immigration law enforcement policies, Univision anchor Jorge Ramos has let loose with an outrageous tirade that could best be described as equal parts nationalistic identity politics, racially-driven demagoguery, and yet another instance of the irresponsible conflation of legal and illegal immigration.

Here's how the Univision/Fusion anchor kicked off his participation in the 2017 edition of the network's annual entertainment awards show, Premios Lo Nuestro ("Our Awards"): JORGE RAMOS, SENIOR NEWS ANCHOR, UNIVISION:

I am an immigrant, just like many of you. I am a proud Latino immigrant here in the United States. My name is Jorge Ramos, and I work at Univision and at the Fusion network. And you know exactly what is going on here in the United States. There are many people who do not want us to be here, and who want to create a wall in order to separate us. But you know what? This is also our country. Let me repeat this: OUR country, not theirs. It is our country. And we are not going to leave. We are nearly 60 million Latinos in the United States. And thanks to US, the United States eats, grows and, as we've seen today, sings and dances. So when they attack us, we already know what we are going to do. We are not going to sit down. We will not shut up. And we will not leave. That is what we are going to do.

I accentuated the word "also" because we have to be fair.

Jorge Ramos was skirting a line here, and doing it in a rather sophisticated way. He is making a statement that sounds racist (and he's doing it on purpose, if you ask me), but is not technically racist.

So, going strictly by the words that came out of his mouth, I would acknowledge, of course, America belongs to Latinos just as much as it belongs to any other group of American citizens.

HOWEVER, in my opinion, what Ramos is really doing is this: He is insinuating that Americans have a racial problem with Latinos, when the issue has nothing to do with race.

The issue is ILLEGAL Immigration.

So shut the fuck up, Jorge Ramos. I am calling you out on playing with racism and for being intellectually dishonest in your argument. You are not stupid, so I am calling it dishonesty.

OUR country, not theirs. It is our country.

The insistent argument that illegal immigration IS immigration will end with MASS DEPORTATIONS.

These people are fools whose arrogance, and self righteous anger and stupidity will drive Americans, LEGAL Americans right to the final denouement

As I wrote, he is playing a game. And the game is to attempt to make Immigration and Illegal Immigration the same thing so he can call us racist, which is asinine.

It's the same kind of game people play when they call those who object to Islam "racist".

And thanks to "you" (the illegal immigrant) our country also pays for countless free surgeries, hospital stays, etc. THrow in the Medicaid dental mills, identity theft and WIC and other fraudulent practices.

We had an illegal immigrant at my facility who racked up one million dollars in charges over in the ICU before we found an LTAC to take him.

Who pays for THAT? I do. In suppressed wages for nursing staff.

Singing and dancing is free. Healthcare is expensive.

a deliberate attempt at balkanization.

So sick of it!

Epa,
The insistent argument that illegal immigration IS immigration will end with MASS DEPORTATIONS.

Maybe both -- no matter what now.

TLEP,
Thank you for pointing out the impact of illegal immigration on our healthcare system.

Obama is the Source of the Coup

ObamaTweet: We asked, and you answered. I'm asking you to believe. Not in my ability to make change, but in yours

Every time I hear these bozos conflate ILLEGAL and LEGAL immigrants I want to reach into the TV or radio, grab them by the scruff of the neck and shake them into admitting there is a difference., This arrogant ignorance drives me batty..

Anonymous,
Interesting link about Obama as the source of the coup!

WC,
You ain't the only one who has to fight that urge!