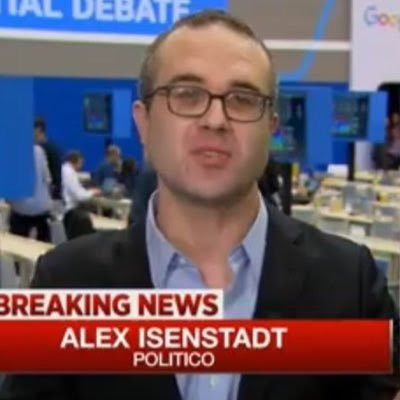 
Politico reporter Alex Isenstadt allegedly laughed when he was told the White House deputy communications director got emotional after learning that a Navy SEAL was killed during an anti-terrorism raid in Yemen, according to White House officials.

But she and Spicer denied the encounter ever happened.

“‘The only time Jessica recalls almost getting emotional is when we had to relay the information on the death of Chief Ryan Owens,’ Spicer said, referring to the Navy SEAL killed recently in action in Yemen,” Politico reported.

The Politico report did not include how Isenstadt responded to Spicer’s comment. The reporter allegedly laughed and was dismissive after learning of Ditto’s reaction to Owens’ death in Yemen, the Washington Examiner reported, citing anonymous officials.

“He started laughing about that SEAL,” said one official, who was upset that the Politico story described Ditto as a “more junior spokesperson.”

thought balloon over Maxine Waters, 'he's just a racist scumbag trying to distract us with a few pennies for the plantation slaves'

McClatchyDC: Army Makes History by Putting Muslim in Charge of 14,000 US Soldiers’ Spiritual Needs
In January, Lt. Col. Khallid Shabazz received the call every Army chaplain dreams of, the call that validates years of intense study and hard work toward keeping the U.S. military in good spiritual health.
He was offered the job of chaplain for an entire division, an honor for anyone in his field but a milestone in his case. After a ceremony this summer, Shabazz will become the first Muslim division-level chaplain in the history of the U.S. military – a Muslim spiritual leader for more than 14,000 mostly Christian soldiers.
[snip]
Shabazz said. “I have a real opportunity to be an ambassador for the Army and for my religion.”

The decision was made in January. The article doesn't give an exact day, but guess who was still president then? Probably one of Obama's little land mines he left behind for Trump.