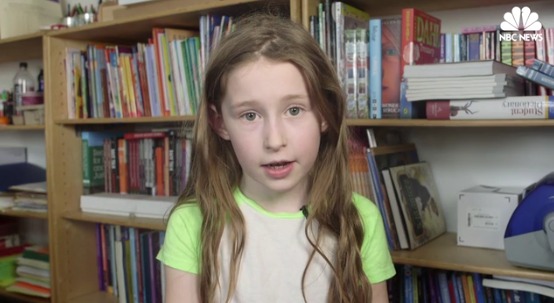 The Government-Media/Academia Complex at work.


NBC News handpicked anti-Trump tykes for two propaganda videos to make it appear that every child in American thinks Pres. Trump is an ignorant racist and threat to the country.

Both videos open with smarmy, false compliments to give the illusion that these kids haven’t been indoctrinated by leftist teachers and liberal media…but, then, both launch into unrelenting snide rebukes couched in innocent-kid-speak.

The kids accuse Trump of racism and violence against blacks:

“Most of my family is black. I’m afraid that you’re gonna hurt some of us blacks.”

“You are here, attempting to white-wash America.”

“I don’t like your definition of American, because I don’t seem to fit within it.”

These adolescent activists really, really don’t want a border wall or travel ban on state-sponsors of terror, because it’s not “nice” and “fair”:

“Not letting immigrants into America is really not nice, so please let them in.”

“It’s not fair for refugees.”

“Just because I’m Mexican, doesn’t mean you can build a wall around the country.”

“You’re going to separate me away from the rest of my family, and I really don’t what that because I love them too much.”

“Some of my friends are really scared about you building a wall, and the travel ban, because a lot of their families live in different places.”

Thanks, but no thanks on the video invite. I don't even watch the evening news anymore. Can't stand Scott Pelly or David 'what'shisnuts'.....oh yeah, Muir is it?

The fucking feal bad for me, tug at your liberal heart strings is enough to make me puke.

Agree with Tim. Nah. Don't want to watch a video with children telling an adult who pays bills and taxes how the world should work.

Glad you posted the piece. But I have become quite Zen regarding watching this type of videos. Prefer to keep my blood pressure low and my thoughts tranquil.

It's interesting how Liberals are obsessed with the wisdom of children.

That shows you about how much "wisdom" Liberals have.

Apparently there is no bridge too far with regard to Trump Derangement Syndrome.