WHITE HOUSE V HOSTILE PRESS: It is to be war? Apparently YES

One side>>
Semi Watergate Redux: The White House, embroiled in a scandal in which they know they are guilty uses pressure on the FBI (as Nixon tried to use the CIA to pressure the FBI ’72-74) to falsely tell the public they are not guilty.
The other side>>
Yellow Journalism on Crack, the press acts as a force of hostile political opposition WITH political goals in mind and commits acts to that end:
The FBI tells the White House (Reince Priebus) they know the stories about Russia and Trump election/transition team are inaccurate and/or untrue. The WH Chief of Staff then asks the FBI to release a statement reflecting this and the FBI says, ‘no, we really can’t do that under our policies’
THE PUBLISHED STORY, by NYT and CNN, become the ONE SIDE above, and does not mention the WH comments when they then go on to make their BANNING the TOP STORY. 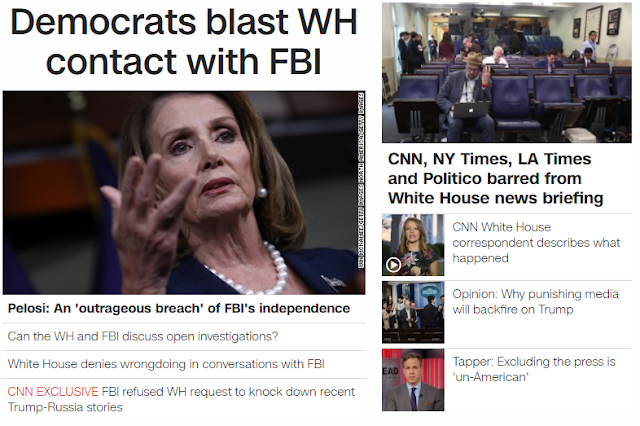 CNN especially, is attacking the WH for preventing them access because they, in the view of the WH, ARE LIARS. Jake Tapper, btw, then goes on to ape Chuck Todd in calling Trump unAmerican (which, btw fired off Trump’s enemy of the people tweet). I wonder what these people make of Americans who voted for and support the President? Perhaps 300+ electors of us are really fascists after all, since we have felt for YEARS the press was hostile to what WE regard as the heritage values of the Constitution. Imagine what will happen if the Republicans get one more state legislature control and call a convention of the states to directly act on the Constitution.
All this is why this WOULD be a good moment for the FBI to speak up.
They SERVE the public.
This is an easy one.
If the FBI told Reince they were comfortable with the conclusion that there was NO Trump election/transition team wrongdoing with Russia, THEY SHOULD SAY SO. And if that is the case, then any news outlet which ran the OTHER story, needs to PUBLICLY APOLOGIZE and I would keep them out until they did.
If the FBI did NOT go to Reince, then we need to know this about the WH.
Frankly, the idea that we are looking back and forth at this, is PROOF POSITIVE, that while we EXPECT administrations to exaggerate, dissimulate, and LIE (see: GULF OF TONKIN), we also no longer BELIEVE the press. At all. On any subject. Even though we would like to.
So, Mr. Comey, you stuck around for this,
LET”S HAVE IT.
Because otherwise, a WAR to the death between the most hostile forces of a hostile press and the President, will not end happily for ANYONE.
You know the truth, Comey, let’s have it, straight out..no looking for a middle ground. You can go teach criminal justice somewhere, but you OWE US OUT HERE.
Why is this happening?
Steve Bannon:

here’s why it’s going to get worse: Because he’s going to continue to press his agenda. And as economic conditions get better, as more jobs get better, they’re going to continue to fight. If you think they’re going to give you your country back without a fight, you are sadly mistaken. Every day — every day, it is going to be a fight. And that is what I’m proudest about Donald Trump. All the opportunities he had to waver off this; all the people who have come to him and said, “oh, you’ve got to moderate.” Every day in the Oval Office, he tells Reince and I, “I committed this to the American people; I promised this when I ran; and I’m going to deliver on this.”

What are the possible reasons that the FBI won't speak up -- particularly if there's no there, there?

Didn't Reince basically ask just ONE QUESTION, and if only one question is that question about clarification, coercion, or threat? I think his question was innocent enough. CNN has turned the story into a legend as opposed to a small factoid.

What disgusts me, is that CNN will drone on and on about this for endless hours. Is the NOTHING ELSE going on in the world that is noteworthy?

Their myopia is astounding.

I was saddened to read recently that something like 62% of Trump supporters were still Russophobic and regarded Russia as a dangerous enemy of the U.S.
That of course stifles Trump's better instincts and plays into the hands of his worst enemies in the elite of both parties.

I can see Trump defying Russia on China, saying look, we are giving you a freer hand in Europe and the Mideast since we brought havoc to that region, but we are going to take it to China regardless of your feelings on that subject. That would be okay, but Pat Buchanan is right, NATO is obsolete.