Bethlehem Beyond The Christmas Calm 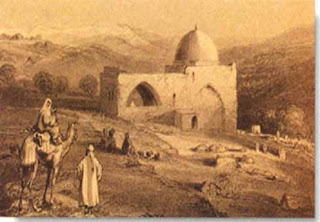 Bethlehem, the birthplace of the Messiah, is not at all a Christian city anymore. And, it appears that eventually there will be no Christians left there at all:


IN 1948, Bethlehem was a largely Christian community, with Christians comprising an estimated 85 percent of the population. Today, that percentage has shrunk to something closer to 12 per cent. Until the Palestine Authority took over the control of the city in 1994, Bethlehem thrived alongside Jerusalem. The roads in and out of the city were lined with shops and markets, and residents came and went freely. All that began to change during the first intifada, with stone-throwing incidents gradually escalating into shootings, assaults, and torched cars.

Later, during the second intifada, security became a matter of life and death once suicide bombings were introduced. These attacks ultimately led to the construction of the controversial security barrier.

Rowan Williams, the Archbishop of Canterbury and no friend of Israel, wrote in late 2006, "I have spent the last two days with fellow Christian leaders in Bethlehem…there are some signs of disturbing anti-Christian feeling among parts of the Muslim population, despite the consistent traditions of coexistence. But their plight is made still more intolerable by the tragic conditions created by the 'security fence' which almost chokes the shrinking town..." He went on to speak of dramatic poverty, soaring unemployment and practical hardships.

In an 2005 interview with the Jerusalem Center for Public Affairs (JPCA), Steven Khoury, of Bethlehem's First Baptist Church, reported that the church had been attacked by Muslims from a nearby refugee camp "…with Molotov cocktails 14 times. Our church vans have been burned. The church was broken into and defaced with graffiti five times." Others have reported the shooting of the Baptist Church's pastor.

In 2006, the UK's Daily Mail reported on the struggle of two Christians from the Bethlehem suburb of Beit Jala who were facing continuous persecution for their faith. George Rabie, a cab driver, said that he had been beaten by a gang of Muslims visiting from nearby Hebron, angered by the crucifix hanging on his windshield, and that he experiences persecution "every day." Jeriez Moussa Amaro told the Daily Mail that his two sisters Rada, 24, and Dunya, 28, had been shot dead by Muslim gunmen. "Their crime was to be young, attractive Christian women who wore Western clothes and no veil…" A terrorist organization, al-Aksa Martyrs Brigades, claimed responsibility for Amaro's sisters' murder.

OVERT violence isn't the only difficulty faced by Christians in areas under the Palestinian Authority. In recent weeks, Ramallah pastor Isa Bajalia, an American Christian of Arab descent, stated publicly that he has been threatened by a Palestinian Authority official, who demanded he pay $30,000 in protection money to ensure his safety. On November 11, Fox News reported, "Pastor Isa Bajalia is legally blind, yet he was also told by the official he would be crippled for life. The trouble started after church members held a prayer session for several Palestinians. Bajalia says he has been under surveillance and receiving threats." Isa Bajalia has since fled Ramallah.

Among the compiled JCPA interviews of West Bank Christians are reports of extortion by Arab Muslims, demands for protection money, seized properties, vandalized homes and shops, widespread rape of Christian girls, honor killings, and murders of converts to Christianity from Islam.

In July 2007, Rami Khader Ayyad, 32, a Palestinian Christian bookstore owner who had received repeated threats was found stabbed to death in a street in Gaza City. "I expect our Christian neighbors to understand the new Hamas rule means real changes," commented Sheikh Abu Sakir, leader of Jihadia Salfiya, an Islamic outreach movement. "They must be ready for Islamic rule if they want to live in peace in Gaza."

In a recent briefing, Justus Reid Weiner, Resident Scholar of the Jerusalem Center for Public Affairs reported, "The growing strength of Islamic fundamentalism within the Palestinian national movement poses problems for Christians, who fear they will be deemed opponents of Islam and thereby risk becoming targets for Muslim extremists. This is exacerbated by the fact that Hamas holds substantial power and seeks to impose its radical Islamist identity on the entire population within the P.A.-controlled territories."


Where in the world do Muslims live peacefully with their neighbors?

I think that Muslims live peacefully with their neighbors as long as (1) they are not part of an Islamic political nation or (2) the population of Muslims in that given area is very low.

What has happened to Bethlehem--as outlines in this article--is a spiritual disgrace. The birthplace of Jesus just isn't safe for His followers today!

Funny how Mecca doesn't have that problem.

Muslims live relatively peacefully in the United States, but you wouldn't know it by those who represent them: