What The Terrorists Fear Most 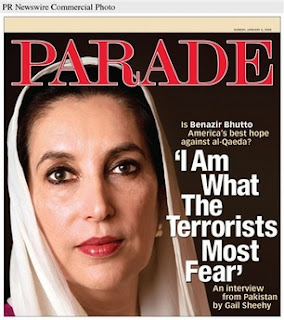 In late November, PARADE sent Contributing Editor Gail Sheehy to Pakistan. Sheehy traveled with former prime minister Benazir Bhutto as she campaigned through her home provinces. Sheehy had two long interviews with her—the first in Bhutto’s home in Islamabad, a second at her residence outside Karachi. Bhutto told Sheehy that she had long been a target of terrorists.
Today’s suicide bombing mirrors the earlier attempt on her life that Bhutto described to Sheehy.
The interview with Bhutto will be the cover story of PARADE on January 6, 2008.
Posted by Pastorius at 1:24:00 am

It is heartening to see a mainstream story that even indirectly reveals the jihadist threat.

Unfortunately, even Bhutto was known to make obfuscating comments such as "no real Muslims would try to kill me." I believe that is why she used the phrase "the terrorists" in the sentence which appears on the cover of Parade.

But yeah, I think the public gets the real picture here, at least a bit.