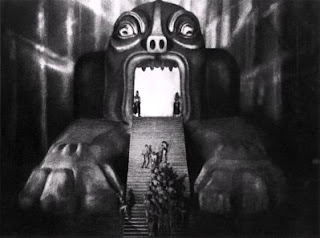 (Thanks to Always On Watch)


Moloch in medieval texts
Like some other gods and demons found in the Bible, Moloch appears as part of medieval demonology, as a Prince of Hell. This Moloch finds particular pleasure in making mothers weep; for he specialises in stealing their children. According to some 16th century demonologists Moloch's power is stronger in October. It is likely that the motif of stealing children was inspired by the traditional understanding that babies were sacrificed to Moloch.

"besmeared with blood
Of human sacrifice, and parents' tears."
He is listed among the chief of Satan's angels in Book I, and is given a speech at the parliament of Hell in Book 2:43 - 105, where he argues for immediate warfare against God. He later becomes revered as a pagan god on Earth.

BTW, in the early days of Islam, the tribes did not have to abandon their other gods. Rather, they were required to say that Allah was the greatest of the gods. "Allahu Akbar" means "Allah is the greatest." According to an Arab with whom I spoke a few months ago, that phrase was designed to ease the tribes into monotheism. So, even way back then, the concept of absolute truth was nebulous and to be used for political gain.

You can find Allah-worship all over the bible.. he goes by lots of names.

Vince you had me there for a second. Must be slow today...