"An Islamic London Would Be A Better Place" 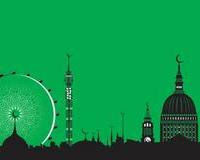 Time Out magazine must be vying to become the most pathetic group of cock-sucking dhimmis ever:

It’s the capital’s fastest growing religion, based on noble traditions and compassionate principles, yet Islam can still be tainted by mistrust and misunderstanding. Here Time Out argues that an Islamic London would be a better place
The official executioner placed a stepladder against the plinth. The lorry pulled up and the young man was pushed out, then forced up the ladder. The noose was forced over the condemned man’s head. The crowd chanted ‘Allahu akbar’ (God is greater than everything).
The hoist driver put his finger on a green button …
Okay, not really – that’s a hysterical, right-wing nightmare of a future Muslim London: where an cruel alien creed is forced on a liberal city. A society where women are second-class citizens, same sex relationships a crime and Sharia law enforces terrible public disfigurement and death. But the reality is a long, long way from this dark vision. For a start, Islam is not an alien religion to London. At the end of World War I the city sat at the heart of an Empire that had 160 million Muslim subjects, 80 million in India alone. London was the largest Islamic capital in the world. Forty years later and the end of the Empire, unrest and war and poverty in south Asia had lead to mass immigration to the mother country and London became a Muslim capital in another sense.

Oh really?!? Sounds like complete, unadulterated bullshit to me. But, what do I know? I'm just a fucking Infidel.
So, let's look at why an Islamic London would be a better place.

Public health
On the surface, Islamic health doesn’t look good: the 2001 census showed that 24 per cent of Muslim women and 21 per cent of Muslim men suffered long-term illness and disability. But these are factors of social conditions rather than religion.

All those social conditions are the result of Islam, but I guess Time Out London can't be expected to deal with reality, can they?
By the way, are you getting the feeling that the writers at Time Out London would be pretty-mouthed little prison bitches? With men like this, who needs women, huh?
It's fucking disgusting.

In fact, Islam offers Londoners potential health benefits ...
Alcohol is haram, or forbidden, to Muslims. As London is above the national average for alcohol-related deaths in males, with 17.6 per 100,000 people (Camden has 31.6 per 100,000 males), turning all the city’s pubs into juice bars would have a massive positive effect on public health.

Ecology
‘The world is green and beautiful,’ said the prophet Muhammad, ‘and Allah has appointed you his guardian over it.’ The Islamic concept of halifa or trusteeship obliges Muslims to look after the natural world and Muhammad was one of the first ever environmentalists, advocating hima – areas where wildlife and forestry are protected.

Yeah, look at how beautiful the fucking Muslim world is already.
The Jews turned the desert of Isreal into an oasis, and just across the street it's a god damned trash heap.
The whole Islamic world is a wasteland, and to the extent they don't have pollution it's because THEY DON'T HAVE ANYTHING, no industry, no innovation, nothing. They don't build their own stuff. They can't even refine their own oil, for God's sake. They don't do anything, so there is no byproduct to their existence except for the shit that comes out of their buttholes.
And, if you don't believe me, then here is a list of the top exports of the Islamic world:
Saudi Arabia
Iran
Syria
Look 'em up. There really isn't much to see. Fruits, nuts, animals, and, uh, well, oil.
Anyway, I'm not going to go on with this. Suffice it to say, if you are ever locked away in an Islamic jail, Time Out will be happy to fill your sexual needs in whatever position you desire.
And, by the way, if you are ever locked away in an Islamic jail, it seems to me, it really isn't that much different from living in an Islamic society.
Posted by Pastorius at 1:36:00 pm

You nailed it my friend. Time-Out has been the "Gay-Guide" to London since the early eighties.

I had no idea.

But, I guess somehow their gayness seeped through, because, as you say, I nailed it.