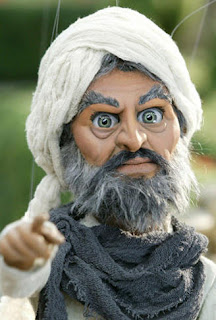 Who are the savages here?
Michael Savage criticizes Islam and the Council on American-Islamic Relations organizes a "boycott" aimed at silencing Savage. Fuck them.

Islam is an ideology. If we can not criticize ideologies, then the American political system down. Imagine that we were told we could not criticize big business or the government. We wouldn't accept that, right? So, why would we accept the idea that we are not allowed to criticize Islam?

From the New York Times:


SAN FRANCISCO — The humbling of Don Imus last spring over his remarks about the Rutgers women’s basketball team has done nothing to quiet Michael Savage, a radio host with a far bigger following and far more checkered track record.

Mr. Savage, whose program reaches an estimated eight million listeners a week on nearly 400 stations, suggested over the summer that a group of college students on a hunger strike in support of easing immigration restrictions should “fast until they starve to death.” In October the Board of Supervisors of San Francisco, the city from which Mr. Savage often broadcasts, took the unusual step of passing a resolution condemning him for the remarks.

Then, a few weeks ago, Mr. Savage uncorked a cascade of invective about Islam. Among his on-air comments: the Koran is “a book of hate”; some Muslims, at least, “need deportation”; and adherents of Islam would do well to “take your religion and shove it up your behind” because “I’m sick of you.”

In response the Council on American-Islamic Relations, whose stated mission includes correcting mischaracterizations of Islam, tore a page from the playbook of Mr. Imus’s critics. It made Mr. Savage’s comments widely available on the Internet and called on advertisers to boycott his program, which is behind only Rush Limbaugh’s and Sean Hannity’s in number of listeners, according to Talkers magazine, an industry publication.

At least two of his major sponsors — Citrix, which sells remote access to computers, and Trusted ID, which provides protection against identity theft — have pulled their spots. Thus far, Mr. Savage said in an interview last week, the boycott had cost his program more than a million dollars in advertising revenue committed for next year.

On Dec. 3 Mr. Savage fired back at his critics in a way Mr. Imus never did: He filed a lawsuit in United States District Court against the council, not only for taking his comments out of context — he says they were made within a broader discussion of the president of Iran — but for then making audio of them available on its Web site, cair.com.

With his suit, Mr. Savage has put himself in an odd position for someone who makes his living talking and is a fierce advocate for free speech: He is complaining about others quoting him.

But in the interview Mr. Savage contended that the council had violated the copyright protections on his broadcast by using his words, in effect, to raise money. He cited the bright orange button labeled “Donate” that appears on the council Web site just to the right of the “Action Alert” it put out against him.

“If they are trying to hang me by my own petard, they have no right to use my petard,” Mr. Savage said after Monday’s show. “It’s my petard, not theirs.”


The whole Western world needs to tell Islam that. It's our fucking petard. We created this whole culture here. You created nothing. You can't even refine your own oil. You are useless and your religion is exactly what made you so. Your religion does not allow for self-analysis. Any organization which does not allow self-analysis is doomed to failure by the very fact that it can never change or improve.

Fuck you, Islam. Your values are counter to that of the Western world. We value self-analysis. We criticize ourselves endlessly so that we may create and innovate, and you hate us for it.