UNICEF Photo Of The Year 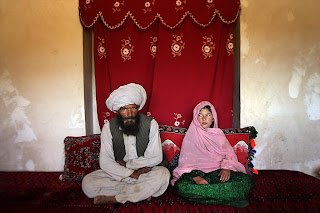 The image is startling -- a 40-year-old groom sitting beside his 11-year-old future bride. Photographer Stephanie Sinclair, who took the photo last year in Afghanistan, asked the pre-teenage bride what she felt on the day of her engagement.
"Nothing," said the girl, according to Sinclair. "I do not know this man. What am I supposed to feel?"
The sobering image and the story behind it brought Sinclair top honors in the annual Photo of the Year contest sponsored by the United Nations Children's Fund (UNICEF).
Awards were distributed to first through third place winners as well as eight honorable mentions. International judges considered 1,230 entries from 142 photographers in 31 countries.
Sinclair, an American photographer, produced her winning photograph as part of a series of pictures she took about child marriages between 2005 and 2007 in Afghanistan, Ethiopia, and Nepal. UNICEF estimates that about 50 percent of Afghani women are married before they turn 18.
Posted by Pastorius at 6:23:00 pm