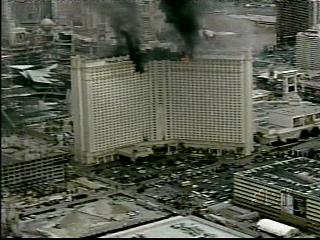 UPDATE: The fire is contained now.
Hopefully, no one is hurt.

Drudge has a post up (which is not accessible for some reason) claiming that the Bellgaio and the New York New York are both being evacuated.

I don't think they are that close to each other. Look at the photo.


Why evacuate Bellagio? It’s a mile away - north of the huge CityCenter construction site.
More info from Fox5Vegas:
LAS VEGAS -- A spectacular fire is raging atop the landmark Monte Carlo Resort and Casino on the Las Vegas strip, consuming large portions of the complex's top floors and sending plumes of thick black smoke into the air.
Fire crews on top of the 3,000-room hotel at 3770 Las Vegas Blvd. S.re trying to contain the blaze, which broke out shortly after 11 a.m.
Four workers are trapped on the roof. There is no word yet on what happened to them.
Four hotels have been evacuated -- Bellagio; New York, New York; MGM and City Center.
The blaze began at the top of the hotel and has spread down into four different parts, including the roof, top corner and a couple of floors down. There are 32 floors and about 3,000 people staying at the hotel.
Guests were spotted looking out of hotel windows, and guests were gambling up until a recent evacuation.
Guests who are attempting to check in are being turned away.
Debris is falling from the blaze, and it is catching other parts of the hotel on fire.
Las Vegas Boulevard is closed from Harmon to Tropicana avenues.
There is no word on the cause of the blaze or whether or not there have been any injuries.
Posted by Pastorius at 7:47:00 pm

Your blog is so full of shit. Its all false with no proof of your claims against Islam and if you werent such a laughable geeky ignoramous sitting behind a computer I'd actually credit you with having some balls.

The truth is thanks to Globalisation muslims live in all countries especially the west in GROWING numbers...on the whole they contribute positively to societyu and like all people you are always going to have oddballs (you are a classic example). Muslims currently make up about 20% of the worlds population and are growing, so a.) you cant exterminate us like you did they jews in Germany, b.) we will not leave the western coutnries because they are our homes which we love c.) the only thing you can do is spout shit
so on balance do muslim give a fuck what you think? NO :-)

So, I guess you won't be donating any money then, huh?

Yeah, Salahoodoo, we've seen how much you love our country, especially in the way your leaders keep insisting how much better it would be under Sharia law. And the way you're always Muslim and Ummah first and American maybe if it's to the advantage of Islam to say so.

Reverie
you're showing your arrogance and ignorance by suggesting the west equates to the US of A. As an 'American' how much do you know about the native brown people of your land and how much have you adopted their customs? You're a hypocrite.

I'm British and Muslim with white Scottish blood and proud of it. Let me tell you another thing for free the vast majority of the british and european public hate right-wing Americans with a passion so dont try pretending like you speak for the free and fair.

You're obviously a Fox news watching american and you probably were one of those who fell for the Obama-Osama connection they made.

Let me educate you:

1.) There are no muslim 'leaders'. You have certain sects who may have a leadership but the majority of muslims do not subscribe to the wahabi doctrine or the extreme doctrine spouted in recent years as a reaction to Imperialism.

2.) Sharia law is not sacred law but an attempt at deriving law from the Quran and the sayings of the prophet - it sprang up about 100 years after the prophet. The rulings differ vastly and are generally quite lenient in comparison to the Jewish and Christian holy books. One example of many I could give:

"Every one that is found shall be thrust through; and every one that is joined unto them shall fall by the sword. Their children also shall be dashed to pieces before their eyes; their houses shall be spoiled, and their wives ravished." (Isaiah 13:15-16)

In the Quran ALL non-combatants cannot be harmed. Read Surah Tawbah if you dont believe me.And even then each verse end with "and if you forgive it is better for you".

It was your kind that lynched, raped and murdered black people for centuries in your country so dont get on your fucking moral high horse with me. It was the muslims in Spain who brought together jews and chrisitans in harmony for the first time.

Salahudeen,
At this blog, we are against;

1) the death penalty for gays, apostates, and adulterers

3) the subjugation of women (worth half that of a man, burqas, etc.)

You obviously have a neo-con fascist agenda so dont give me bullshit about you having problems against the subjugation of women, dhimmi laws etc. Go read General Sir John Glubb's book "A short history of the Arab people" to see that dhimmis overwhelmingly prefered life under the ottomans and Early muslims because they paid LESS tax and they didnt fight in the army AND they didnt pay the poor tax muslim have to pay. To say that the dhimmi laws were in any way unfair is ludicrous and shows how little you blantantly racist eurocentric bigots know about history. In relation to the one half of man debate - against, its bollocks. If you ever went to a muslim county like oman or egypt or Malaysia or Indonesia you'd realise. The quotes you are going to give are related to Afghanistan and Saudi Arabia which do not represent the majority of muslims nor islam but are rather a product or reaction to foreign involvement.

And again if you new Islam and history you'd know that the burkha isnt from Islam but was some muslims adopted as fashion from the 7th Century Syria Christian Elite women who used it as a status thing. Women are forbidden to cover their faces in the pilgrimage to Mecca for instance.

The verses relating to the death penalty for apostates is related to a certain time and place when the state was at threat...similar to laws against traitors. Muslims have a better track record of tolerance to gays than the west too. Some of your southern bible belt states in the south dont treat gays too nicely either so is that an argument against the USA? You are clearly showing what complete monosyllabic morons you really are and frankly I dont have time for you so I wont be visiting nor contributing to your site (to your relief no doubt) any longer.

As I said muslims are pretty much outnumbering everyone apart from the chinese in terms of population so you cant talk all the shit you want in your facist little gatherings because it doesnt make the blindest bit of difference.

Where do you stand on it?

And, once again, do you oppose the death penalty for gays and apostates?