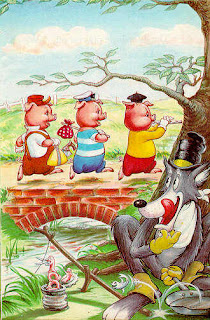 Muslims will huff and puff and blow your house down ...

if you let them.

How fucking pathetic do you have to be to censor fairy tales because you fear they might be offensive to Muslims? Sure, Muslims might be offended. That's the fun of having Muslims around. You never know what might offend them.

This just had to happen, well quite frankly who gives a damn about what the Muslim community thinks.

This is another utterly stupid act of dhimimitude and oversensitivity.When are they going to declare Animal Farm unclean or unfit after all the Pig was the leader (if I remember correctly).

Piglet, Teddy Bears and now the three little Pigs, what idiotic people are making these fatuous decisions. They are 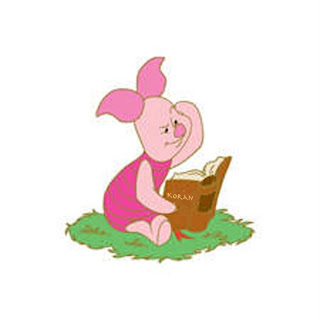 clearly not very bright, so I think they work for a Goverment Quango - after al, being dim is a pre-requsite.

I saw this story yesterday. What a bunch of dhimmis not to consider the award out of fear of offending Muslims?

And are Muslims AFRAID of pig imagery? Sheesh! I've never known a Jew to feel that way about "The Three Little Pigs." It's a story and doesn't force the consumption of pork.

Maybe all of us need Muslim repellant. I have pig decor all over my front porch and some in every room inside as well. I also have a baseball cap with a pig logo and the words "The Gigglin' Pig." I think I'll start wearing that cap all around time and see what happens.

Great post, BTW! I was planning my own post on this topic, but I think I'll "borrow" most of yours. Here's hoping that you won't be offended, Pastorius. Hehehe.

AOW said
"And are Muslims AFRAID of pig imagery?"


The Times reports that: "Nancy Bennett, 49, who faces possible prosecution after complaints from Muslims over a display of china pigs in the front window of her home in Leicester, had a quotation from the Koran alongside them, it emerged yesterday". The first national newspaper to report on the case was the Sun . To date, there has been no reports from Leicester papers. The Independent reports that Ms Bennett, who lives near the Highfields Mosque, claims the complaint about the pig ornaments "was made after she went to the police to report allegations of harassment. It is understood that the pigs were displayed alongside a quote from the Qur’an which said: ‘Let there be no coercion in religion’. Leicestershire Police were investigating the matter and would be sending a file to the Crown Prosecution Service, who might consider bringing charges against Ms Bennett under the Public Order Act.

Ms Bennett explained that on 24 May: "I arrived home to find the police about to break into my house. They had a warrant. They said they had had complaints about the pigs from neighbours, they considered it was a public order matter and took about 17 of them. I have been told not to replace them. I am sure I am not the only person in Britain who collects ceramic pigs". Leicester Federation of Muslim Organisations’ spokesperson, Yaqub Khan, said that people believed Ms Bennett was aware of the possibility of causing offence, particularly as her house was on the main route to the Central Mosque.

"A historic statue of a wild boar is unlikely to return to Derby's Arboretum, because it could offend Muslims living nearby. The Florentine Boar stood in the Derby park from 1840 to 1942, when it was beheaded by flying masonry during an air raid. Derby City Council had hoped to replace the statue with an identical replica when plans for a massive overhaul of the park were first considered a decade ago. But following reservations raised by some people in Normanton about a new boar statue, the authority decided to consult with local community leaders.

At a meeting of the council's minority ethnic communities advisory committee it was recommended that the boar be replaced with something else because of the strength of feeling among nearby residents as pigs are perceived as offensive creatures by many Muslims. Derwent Ward councillor Suman Gupta said, "If the statue of the boar is put back at the Arboretum I have been told that it will not be there the next day, or at least it won't be in the same condition the next day at least. We should not have the boar because it is offensive to some of the groups in the immediate area."


"Making a pig's ear of defending democracy
By Mark Steyn

A year and a half ago, I mentioned in this space the Florentine Boar, a famous piece of porcine statuary in Derby that the council had decided not to have repaired on the grounds that it would offend Muslims. Having just seen Looney Tunes: Back in Action, in which Porky Pig mentions en passant that Warner Bros has advised him to lose the stammer, I wondered if for the British release it might be easier just to lose the pig.Alas, the United Kingdom's descent into dhimmitude is beyond parody. Dudley Metropolitan Borough Council (Tory-controlled) has now announced that, following a complaint by a Muslim employee, all work pictures and knick-knacks of novelty pigs and "pig-related items" will be banned. Among the verboten items is one employee's box of tissues, because it features a representation of Winnie the Pooh and Piglet. And, as we know, Muslims regard pigs as "unclean", even an anthropomorphised cartoon pig wearing a scarf and a bright, colourful singlet.Cllr Mahbubur Rahman is in favour of the blanket pig crackdown. "It is a good thing, it is a tolerance and acceptance of their beliefs and understanding," he said. That's all, folks, as Porky Pig used to stammer at the end of Looney Tunes. Just a little helpful proscription in the interests of tolerance and accepAnd where's the harm in that? As Pastor Niemöller said, first they came for Piglet and I did not speak out because I was not a Disney character and, if I was, I'm more of an Eeyore."

Here's where to purchase the politically incorrect three pigs software:

And I don't suppose this company gets many muslim customers (I'm surprised the dhimmi British police haven't closed it down):

Najistani,
You are a font of information!

Pastorius, I posted a long excerpt and added something more.

Najistani,
I added the boar story in the posting at my site.

I love the idea of a display of pigs with Koranic verses. I'll have to find out what the Koranic verse about not eating pork is, and have a Piglet t-shirt made of it.

I know Piglet isn't very manly, but he sure does freak the fuck out of those Muslims.

Najistani,
Thanks for all the info. I'll post on that a little later.

Najistani,
Thanks for all the info. I'll post on that a little later.