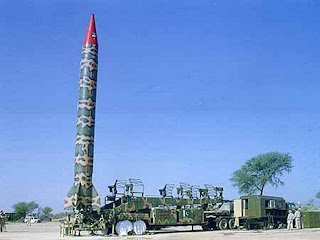 
Pakistan has raised the state of alert around its nuclear facilities amid concerns they could be targeted by Islamist militants.

But a senior Pakistan military official said there had been no specific threat to the sites, and insisted that safeguards in place were fool proof.

The official was speaking in a rare press briefing on the issue.

It followed Western media reports warning that Pakistan's nuclear weapons could fall into the wrong hands.

The Pakistani authorities have been angered by Western media reports speculating that the country?s nuclear arsenal could fall into the hands of al-Qaeda militants.

The senior military official briefing foreign journalists said that the weapons were protected by an elaborate command and control system, and multiple levels of security.

He acknowledged that Islamic militants had begun to attack army personnel in recent months, and that nuclear sites may also become a target.

He said the state of alert around nuclear facilities had increased, but there had been no specific threats against them.

The official said there was no way the Taleban or al-Qaeda could take over Pakistan?s estimated 50 nuclear warheads.

And he dismissed the possibility of collusion from within the system, saying all personnel dealing with sensitive material had been carefully monitored.

Despite fears raised by US media and politicians, the official said the US administration had not shown any recent concern about the safety of Pakistan?s nuclear weapons.

He also said any foreign intervention over the issue would be disastrous for the intruder.
Posted by Pastorius at 8:04:00 pm

"But a senior Pakistani military official... insisted that safeguards in place were fool proof."

I mean, that should be reassuring. After all, we have seen how good the Pakis are at protecting things.

"And he dismissed the possibility of collusion from within the system, saying all personnel dealing with sensitive material had been carefully monitored."

Fair enough. After all, how would we feel if someone suggested there could be Islamist moles at the highest levels of our military, hmmmm...?

"He also said any foreign intervention over the issue would be disastrous for the intruder."

In other words, the nukes are perfectly safe and if perchance they should fall into the wrong hands we'll see they are used on you.

Nothing like having an ally we can rely on.

Dear Sir/Madam
We are an infidel blog from the Maldives and we hope you will add us to the infidel list..
many thanks

Way to break it down, RRA.

That's the whole of the article. I want to say, "Fuck 'em", but the truth is, the Musharraf government actually does help us. They're helping us in Waziristan right now.

Adam,
I put you in our blogroll. And, I invite you to post here if you'd like. If so, email me at

I think the west has every right to be concerned. We all know how reasonable and logical the jihadists are. If they can blow up two buildings and murder 3000 people as they did on 9/11, they will surely jump at the chance to make a wasteland out of any of the thriving cities of the west. This has always...always been our concern about Pakistan's nukes.

Yes, the lesson of 9/11 is they would have used nukes if they had them.

That lesson has been lost on so many people, especially with the passage of time.

Ef. Obama-Been-Lyin' has walked off with the S. Carolina primary. Billary still has the delegate count, but at this point I wonder which is worse: her Saudi girlfriend or Barack picking Hesham Islam as his running mate.

What was that you said about the anti-Christ?

Hi thanks for your comment, every day I feel the desperation that we must do something and every day we lose something. I read another email and sure enough something new has happened.
Today I have read that Brown is taking Britania off the 50p coin, it's small but another step to ridding this Country of the indiginous people, changing our lifestyles beyond recognition. So my way of fighting is through my blog and hopefully it will be worthy in the end, hopefully we will all prevail.
Take care

Pastorius, you're the expert on that story. But I'm told (by idiots who believe all the New Age crap they read) that the ancient Mayans predicted it won't happen until 2012, so does that mean the little silver fork-tongued weasel actually gets elected then? Of course, by then Hesham Islam may be running on his own.

English Rose, I often wonder what it is like living with this so much more intensely as you must be. Can you tell us more of what you experience in daily life? Most Americans are still very sheltered in terms of understanding what Islamic encroachment means. If an American visits England, what will they see in terms of what is happening there?

RRA,
I've been to England, and I stayed in one of the neighborhoods that was hit by the 7/7 bombings. What I saw was a lot of Muslims walking the streets, a lot of Muslim stores, etc.

What I took away from the 7/7 bombings was that there was an incongruency between how many Muslims were in London and how many were killed on those trains.