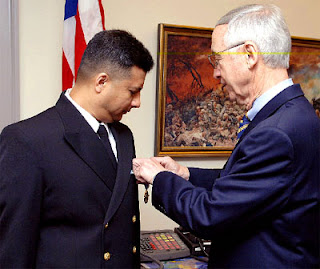 And, he is "personally promoted" by Deputy Defense Secretary Gordon England, the guy who seems to have conspired with Hasham Islam to have Steven Coughlin fired from the State Dept.
From WND (with thanks to Always on Watch):


In a special ceremony, the Pentagon recently promoted a Wahhabi-trained Muslim chaplain who catered to al-Qaida detainees at Guantanamo and fought to establish the first mosque in Marine Corps history.

"It's unusual for a deputy secretary to personally promote an officer of that rank," said one official who wished to go unnamed. "No one has known of such a high-level dignitary doing that."

England also earlier this year personally dedicated a new Islamic center at Marine headquarters in Quantico, Va., on the advice of Saifulislam, a Bangladesh immigrant who became a U.S. citizen in 1995.

The Muslim chaplain, who is stationed at Quantico, recited verses from the Quran in Arabic and English at the summer dedication ceremony, which included representatives from the Council on American-Islamic Relations, several leaders of which have been convicted on terrorism-related charges.

Saifulislam, which is Arabic for "Sword of Islam," received his religious training at a radical Islamic school raided by federal agents after 9/11.

The Graduate School of Islamic and Social Sciences, based in Leesburg, Va., is run by Taha Jaber Al-Alwani, an unindicted co-conspirator in the Sami al-Arian terror case. A federal affidavit used to obtain a warrant to search the school alleges Al-Alwani gave at least $50,000 in jihad money "to support suicide bombings."

Saifulislam insists he is moderate and condemns "terrorism," but critics say his Wahhabi background and associations should give the Pentagon pause.

"The Pentagon is giving him a permanent, taxpayer-supported platform from which to convert grunts to Islam," said terror expert Paul Sperry, a Hoover Institution media fellow and author of "Infiltration: How Muslim Spies and Subversives Have Penetrated Washington."
"With the Quantico mosque, the Pentagon is facilitating the study of the holy text the enemy uses, heretically or not, as their manual of warfare."

Saifulislam's promotion along with the dedication of his new Quantico mosque – the first of its kind in the 230-year history of the Corps – comes on the heels of a Muslim spy scandal at Gitmo involving another Muslim chaplain.

Army Capt. James "Yousef" Yee, who ministered to al-Qaida detainees, was charged with mishandling classified information. Yee, a convert to Islam, quit the Army and the charges were dropped. But two of his Muslim military friends at Gitmo were convicted of espionage-related crimes.

Yee's predecessor at Gitmo was Saifulislam, who was first assigned to the terrorist prison camp after 9/11. While at the Cuban base, the Navy imam privately counseled al-Qaida prisoners in their native tongues of Urdu and Arabic. "I must give hope for them to cope," Saifulislam said at the time.

He set up the diet and prayer regimes for the detainees, recommending they be served halal meals – including traditional dates and lamb – prepared according to Islamic dietary law. Gitmo detainees can now choose from a menu of 113 Muslim-appropriate meals.

In addition, Saifulislam saw to it that detainees receive copies of the Quran and have access to prayer beads and skull caps. Saifulislam also set up a program to train guards to be more sensitive to the religious customs of their Muslim prisoners.

Daft. Absolutely daft. Has he been reading the Washington Post too long? Never heard of Sudden Jihad Syndrome? The dupe is blithering idiot.

This guy warned the state dept in 1999 about the Wahabbis but was considered a deranged alarmist. He is the leader of the Naqshbandi sufi movement and is well qualified to lead.

WHY ARE THE WAHABBIS RUNNING THE MILITARY PROGRAMS AND ADVISING THE DEPUTY SECDEF?

WHY ARE THERE NO CONGRESSIONAL HEARINGS ABOUT THIS?

The chaplain's name, Saifulislam, means sword of Islam. I have confirmed the translation with a few of my Arabic speakers.

More importantly, the fellow seems to be trained in Wahhabism. Of coruse, the big question is whether or not he is indeed a Wahhabist.

BTW, those Arabic speakers were born in the Middle East. They were aghast last fall when Chaplain Saifulislam led the Ramadan ceremony at the Pentagon.

PS to Pastorius: Thanks for posting this. I'm overwhelmed right now--in too many ways to name.

Thanks for sending it to me.

Athos, you're the first poster I've seen with a Royal Doulton avatar. Is that Charles II?

It creeped me out to discover that a Nazi-leaning Satanist cult leader I knew about had turned up at the NSA, but this takes the cake. I wondered why Phares warned so strongly in "Future Jihad" about the danger of infiltration of our military and intelligence services. Now I know.

Pastorius, this is a living nightmare. What is this activist, who only became a citizen in 1995 doing rising right through the ranks to such a position of influence? Imagine if he achieves his goal of recruiting large numbers of our troops to Islam. The implications of that are nothing short of mind-boggling.
I've posted on this and linked back to you.

I have to head out to work, and I know GoV and Fjordman are on the shi-ite list but check out his latest post over there about an outfit in Swedeon called "Expo" and the statements made by its leaders. Chilling. And I mean that in the literary sense.

I think this is what is called between a rock and a hard place.

Good day, all, be back later.

The problem is, if he adheres to the tenets of Wahabbi Islam, then it is very likely that he is comitting sedition behind our backs. We'd really better find out what he is saying to these soldiers.

Fjordman is brilliant I always read his stuff. And, I have read his most recent. Thanks. In fact, hopefully someone will link to it here today. I simply don't have the time.

As for GoV, they are a fount of important information.

Whoa! The Pentagon is conducting some interesting 'disappearing' acts.

"Who is Hesham Islam?"
http://article.nationalreview.com/?q=NTQ1ZjE0MWZlYWI2ODVjYzU3MjcyZjBkMzcxNzBjNTQ=

Rather than answer the questions, the Pentagon has mysteriously 'disappeared' the American Forces Press Service Release expounding the many virtues of one Hesham Islam.

Are they that dumb?

While not large in absolute numbers, the number of people DIRECTLY interested enough to google and find this guy and 'hit' all refs to to him have to be in the tens of thousands.

Could they be so STOOOOPID as to think this would not be picked up?

When will my disgust come to an end?