Wilders Warned He May Have to Leave 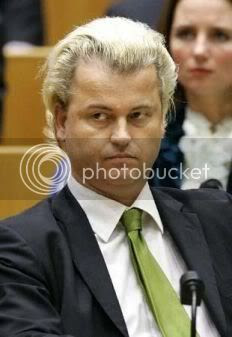 Photo of the courageous Geert Wilders courtesy of Google Images
DUTCH NEWS: MP Geert Wilders has been told he may have to leave the Netherlands temporarily when his short firm over the Koran is completed, the anti-Islam campaigner says in an article he has written in Wednesday's Volkskrant.

The film was due to be ready for screening at the end of this month but has been delayed for several weeks, says Wilders. [Source: Wilders warned he may have to leave]

This is the comment I have left with the newspaper. It will be interesting to see if it gets published. Is freedom of speech still alive and kicking?

Geert Wilders is a courageous politician in a sea of craven fools!

What he is stating is so obviously correct; yet most of the other Dutch politicians are afraid of telling the people that he is right.

A politician is a public servant: He is elected into office in order to serve the best interests of the people. He believes - rightly in my view - that the Netherlands and Europe is under threat from Islam. It is therefore his duty to inform the vast majority of people who have far less understanding of the problem than he.

I applaud the courage of Geert Wilders! We need more politicians like him. Would that there were many, many more. Then, perhaps, the West would have a better chance of survival. - ©Mark

When Ayaan Hirsi Ali had to flee the Netherlands following van Gogh's murder they flew her over here and she wound up in Andover, Massachusetts, for several weeks. That is about 5 miles up the road from where I work. Geert is welcome to our neck of the woods any time. I would consider it an honor.

On and on the downward slide goes!

I get despaired over what I'm seeing--an oncoming train wreck for the West.